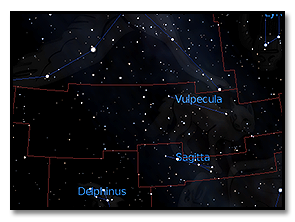 Vulpecula (Vul, fox) is a faint constellation in the northern sky. Its name is Latin for "little fox", although it is commonly known simply as the fox.

Two well-known deep-sky objects can be found in Vulpecula. The Dumbbell Nebula (also known as Apple Core Nebula, Messier 27, M 27, or NGC 6853), is a large, bright planetary nebula which was discovered by the French astronomer Charles Messier in 1764 as the very first object of its kind. It can be seen with good binoculars in a dark sky location, appearing as a dimly glowing disk approximately 6 arcminutes in diameter. A telescope reveals its double-lobed shape, similar to that of an hourglass. Brocchi's Cluster (Collinder 399) is an asterism formerly thought to be an open cluster. It is also called "the Coathanger" because of its distinctive star pattern when viewed with binoculars or a low power telescope.

NGC 7052 is an edge-on spiral galaxy in Vulpecula at a distance of 214 million light-years from Earth. It has a central dusty disk with a diameter of 3700 light-years; there is a supermassive black hole with a mass of 300 million solar masses in its nucleus.

The eastern part of Vulpecula is occupied by the Hercules–Corona Borealis Great Wall (Her–CrB GW). It is a galaxy filament, with the length of 3,000 megaparsecs, making it the largest structure in the universe.