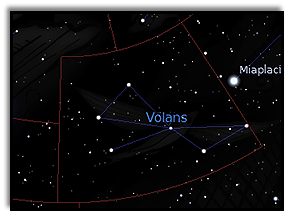 Volans (Vol, flying fish) is a constellation in the southern sky. Volans is one of the 12 constellations that were introduced by the Dutch navigators Pieter Dirkszoon Keyser and Frederick de Houtman in the late 16th century. It was first depicted on Petrus Plancius’ globe in 1598. Plancius (Petrus Plancius (1552 – May 15, 1622) was a Flemish astronomer, cartographer and clergyman) called the constellation Vliegendenvis (flying fish).

In 1603, Johann Bayer included the constellation in his star atlas Uranometria under the name Piscis Volans, the flying fish. It was known by that name until the mid-19th century, when John Herschel suggested that the name be shortened to just "Volans."

Volans represents a type of tropical fish that can jump out of the water and glide through the air on wings. In early celestial maps, the flying fish was often depicted as accompanying the ship Argo Navis (Argo Navis (or simply Argo) was a large constellation in the southern sky that has since been divided into three constellations), and being chased by the predatory fish represented by the Dorado constellation.