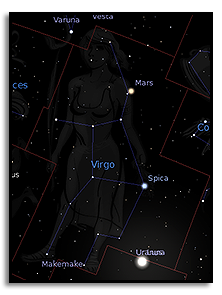 According to the Babylonian Mul.Apin is the conventional title given to a Babylonian compendium that deals with many diverse aspects of Babylonian astronomy and astrology, which dates from 1000–686 BCE, this constellation was known as "The Furrow", representing the goddess Shala's ear of grain or corn. One star in this constellation, Spica, retains this tradition as it is Latin for "ear of grain", one of the major products of the Mesopotamian furrow. The constellation was also known as AB.SIN and absinnu. For this reason the constellation became associated with fertility. According to Gavin White the figure of Virgo corresponds to two Babylonian constellations - the 'Furrow' in the eastern sector of Virgo and the 'Frond of Erua' in the western sector. The Frond of Erua was depicted as a goddess holding a palm-frond - a motif that still occasionally appears in much later depictions of Virgo.

The Greeks and Romans associated Virgo with their goddess of wheat/agriculture, Demeter-Ceres who is the mother of Persephone-Proserpina. Alternatively, she was sometimes identified as the virgin goddess Iustitia or Astraea, holding the scales of justice in her hand as the constellation Libra. Another myth identifies Virgo as Erigone, the daughter of Icarius of Athens. Icarius, who had been favoured by Dionysus is the god of the grape harvest, winemaking and wine, of ritual madness, fertility, theatre and religious ecstasy in Greek mythology, was killed by his shepherds while they were intoxicated and Erigone hanged herself in grief; Dionysus placed the father and daughter in the stars as Boötes and Virgo respectively. In the Middle Ages, Virgo was sometimes associated with the Blessed Virgin Mary.