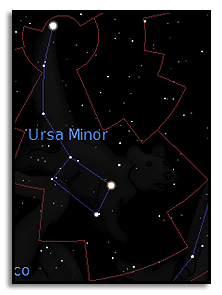 Ursa Minor (UMi, lesser bear), also known as the Little Bear, is a constellation in the northern sky. Like the Great Bear, the tail of the Little Bear may also be seen as the handle of a ladle, hence the name Little Dipper. It was one of the 48 constellations listed by the 2nd century astronomer Ptolemy, and remains one of the 88 modern constellations. Ursa Minor is notable as the location of the north celestial pole, although this will change after some centuries due to the precession of the equinoxes.

Ursa Minor is commonly visualized as a baby bear with an unusually long tail. 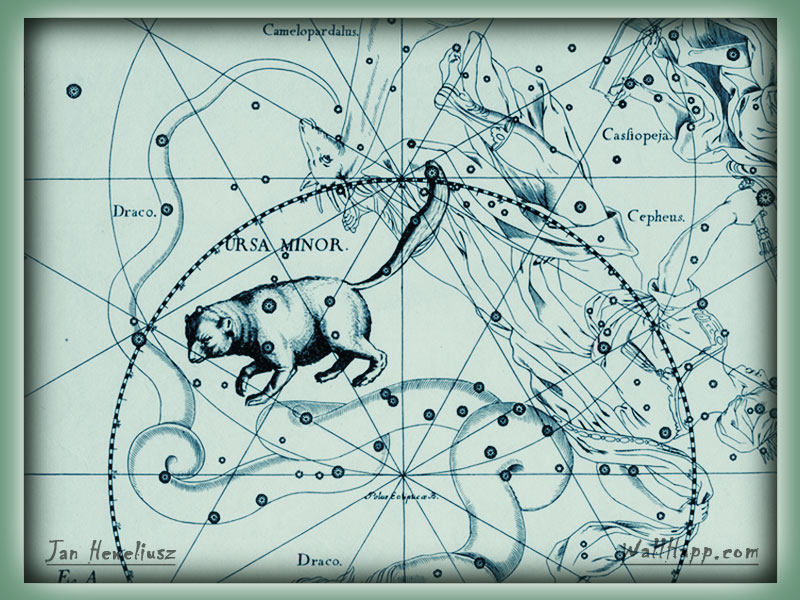 Ursa Minor and Ursa Major were related by the Greeks to the myth of Callisto and Arcas. However, in a variant of the story, in which it is Boötes that represents Arcas, Ursa Minor represents a dog. This is the older tradition, which sensibly explains both the length of the tail and the obsolete alternate name of Cynosura (the dog's tail) for Polaris, the North Star.

Previously, Ursa Minor was considered just seven close stars, mythologically regarded as sisters. In early Greek mythology, the seven stars of the Little Dipper were the Hesperides, daughters of Atlas. Together with the nearby constellations of Boötes, Ursa Major, and Draco, it may have formed the origin of the myth of the apples of the Hesperides, which forms part of the Labours of Hercules. Ursa Minor with its modern associations was invented by Thales of Miletus in approximately 600 BCE, from what had previously represented the wings of Draco, the Dragon. He did so out of a desire to commemorate the location of the North Celestial Pole, then near Beta and Gamma Ursae Minoris.

In Hungarian mythology the constellation is called 'Little Goncol cart' (Göncöl szekér) after a legendary shaman. (Ursa Major is 'Big Goncol cart.') The shaman's knowledge knew no limit. He invented the cart: His nation was wandering, so the cart was the biggest gift of the Gods to the country. Legends claim he knew everything about the world. Nobody saw his death; his body simply disappeared among the stars.

Because Ursa Minor consists of seven stars, the Latin word for "North" (i.e. where Polaris points) is septentrio, from septem (seven) and triones (oxen), from seven oxen driving a plow, which the seven stars also resemble.

Polaris, the brightest star in the constellation, is a yellow-white supergiant and brightest Cepheid variable star in the night sky, ranging from apparent magnitude 1.97 to 2.00. Beta Ursae Minoris (β UMi, β Ursae Minoris), also known as Kochab, is only slightly fainter, with its apparent magnitude of 2.08. An ageing star that has swollen and cooled to become an orange giant, it has a been found to have a planet orbiting it in 2014. It and magnitude 3 Gamma Ursae Minoris (γ UMi, γ Ursae Minoris; also 13 UMi) have been called the 'guardians of the pole star'. Three other stellar systems have been discovered to contain planets.