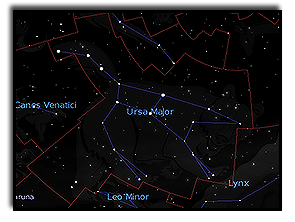 Ursa Major (UMa, Latin: "Larger Bear"; also known as the Great Bear and Charles' Wain) is a constellation visible throughout the year in most of the northern hemisphere. It can be seen best in the month of April. It is dominated by the widely recognized asterism known as the Big Dipper or the Plough, which is a useful pointer towards the north, and it has mythological significance in numerous world cultures.

Ursa Major has been reconstructed as an Indo-European constellation. It was one of the 48 constellations listed by the 2nd century AD astronomer Ptolemy. It is mentioned by such poets as Homer, Spenser, Shakespeare and Tennyson. The Finnish epic Kalevala mentions it, Vincent van Gogh painted it, and Federico Garcia Lorca mentions in his poem "Song for the Moon" written August 1920.

The constellation of Ursa Major has been seen as a bear by many distinct civilizations. This may stem from a common oral tradition stretching back more than 13,000 years. Using statistical and phylogenetic tools, Julien d'Huy reconstructs the following Palaeolithic state of the story: "There is an animal that is a horned herbivore, especially an elk. One human pursues this ungulate. The hunt locates or get to the sky. The animal is alive when it is transformed into a constellation. It forms the Big Dipper".

In Burmese, Pucwan Tārā (pronounced "bazun taja") is the name of a constellation comprising stars from the head and forelegs of Ursa Major; pucwan is a general term for a crustacean, such as prawn, shrimp, crab, lobster, etc.

In Roman mythology, Jupiter (the king of the gods) lusts after a young woman named Callisto, a nymph of Diana. Juno, Jupiter' jealous wife, transforms the beautiful Callisto into a bear. Callisto, while in bear form, later encounters her son Arcas. Arcas almost shoots the bear, but to avert the tragedy, Jupiter turns them into bears and puts them in the sky, forming Ursa Major and Ursa Minor. Callisto is Ursa Major and her son, Arcas, is Ursa Minor. In ancient times the name of the constellation was Helike, ("turning"), because it turns around the Pole. In Book Two of Lucan it is called Parrhasian Helice, since Callisto came from Parrhasia in Arcadia, where the story is set. The Odyssey notes that it is the sole constellation that never sinks below the horizon and "bathes in the Ocean's waves", so it is used as a celestial reference point for navigation. It is also referred to as the "Wain".

One of the few star groups mentioned in the Bible (Job 9:9; 38:32; — Orion and the Pleiades being others), Ursa Major was also pictured as a bear by the Jewish peoples. ("The Bear" was translated as "Arcturus" in the Vulgate and it persisted in the KJV.)

In Finnish language, the asterism is sometimes called with its old Finnish name, Otava. The meaning of the name has been almost forgotten in Modern Finnish; it means a salmon weir.

The Iroquois Native Americans interpreted Alioth, Mizar, and Alkaid as three hunters pursuing the Great Bear. According to one version of their myth, the first hunter (Alioth) is carrying a bow and arrow to strike down the bear. The second hunter (Mizar) carries a large pot — the star Alcor — on his shoulder in which to cook the bear while the third hunter (Alkaid) hauls a pile of firewood to light a fire beneath the pot.

The Wampanoag people(Algonquian) Native Americans referred to Ursa Major as "maske", meaning "bear" according to Thomas Morton in The New England Canaan.

In Hinduism, Ursa Major is known as Saptarshi, each of the stars representing one of the Saptarshis or Seven Sages viz. Bhrigu, Atri, Angirasa, Vasishta, Pulastya, Pulalaha and Kratu. The fact that the two front stars of the constellations point to the pole star is explained as the boon given to the boy sage Dhruva by Lord Vishnu.

In Javanese, as known as "Bintang Kartika". This name comes from Sanskrit which refers "krttikã" the same star cluster. In ancient Javanese this brightest seven stars are known as Lintang Wuluh, literally means "seven stars". This star clusters so popular because its emergence into the start time marker for planting.

In South Korea, the constellation is referred to as "the seven stars of the north". In the related myth, a widow with seven sons found comfort with a widower, but to get to his house required crossing a stream. The seven sons, sympathetic to their mother, placed stepping stones in the river. Their mother, not knowing who put the stones in place, blessed them and, when they died, they became the constellation.