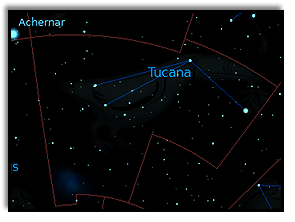 Tucana (Tuc, toucan) is a constellation of stars in the southern sky, named after the toucan, a South American bird. It is one of twelve constellations conceived in the late sixteenth century by Petrus Plancius from the observations of Pieter Dirkszoon Keyser and Frederick de Houtman.

Tucana first appeared on a 35-cm (14 in) diameter celestial globe published in 1598 in Amsterdam by Plancius and Jodocus Hondius and was depicted in Johann Bayer's star atlas Uranometria of 1603. French explorer and astronomer Nicolas Louis de Lacaille gave its stars Bayer designations in 1756. The constellations Tucana, Grus, Phoenix and Pavo are collectively known as the "Southern Birds". 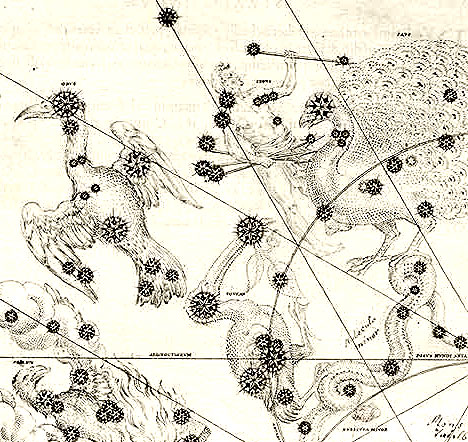 The "southern birds" as seen in Johann Bayer's Uranometria (1603)

The first depiction of this constellation in a celestial atlas was in the German cartographer Johann Bayer's Uranometria of 1603. Both Plancius and Bayer depict it as a toucan. De Houtman included it in his southern star catalogue the same year under the Dutch name Den Indiaenschen Exster, op Indies Lang ghenaemt "the Indian magpie, named Lang in the Indies", by this meaning a particular bird with a long beak—a hornbill, a bird native to the East Indies. A 1603 celestial globe by Willem Blaeu depicts it with a casque. It was interpreted on Chinese charts as Neaou Chuy "beak bird", and in England as "Brasilian Pye", while Johannes Kepler and Giovanni Battista Riccioli termed it Anser Americanus "American Goose", and Caesius as Pica Indica. Tucana and the nearby constellations Phoenix, Grus and Pavo are collectively called the "Southern Birds"

LISTS OF STARS IN Tucana