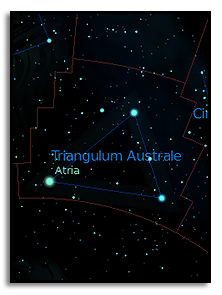 Triangulum Australe (TrA, southern triangle) is a small constellation in the far southern celestial hemisphere. Its name is Latin for "the southern triangle", which distinguishes it from Triangulum in the northern sky and is derived from the almost equilateral pattern of its three brightest stars. It was first depicted on a celestial globe as Triangulus Antarcticus by Petrus Plancius in 1589, and later with more accuracy and its current name by Johann Bayer (celestial cartographer) in his 1603 Uranometria. The French explorer and astronomer Nicolas Louis de Lacaille (Lacaille was a French astronomer) charted and gave the brighter stars their Bayer designations in 1756.

Italian navigator Amerigo Vespucci explored the New World at the beginning of the 16th century. He learnt to recognize the stars in the southern hemisphere and made a catalogue for his patron king Manuel I of Portugal, which is now lost. As well as the catalogue, Vespucci wrote descriptions of the southern stars, including a triangle which may be either Triangulum Australe or Apus. This was sent to his patron in Florence, Lorenzo di Pierfrancesco de' Medici, and published as Mundus Novus in 1504. The first depiction of the constellation was provided in 1589 by Flemish astronomer and clergyman Petrus Plancius on a 32½-cm diameter celestial globe published in Amsterdam by Dutch cartographer Jacob Floris van Langren, where it was called Triangulus Antarcticus and incorrectly portrayed to the south of Argo Navis (Argo was a large constellation in the southern sky that has since been divided into three constellations). His student Petrus Keyzer, along with Dutch explorer Frederick de Houtman, coined the name Den Zuyden Trianghel. Triangulum Australe was more accurately depicted in Johann Bayer's celestial atlas Uranometria in 1603, where it was also given its current name.

Nicolas Louis de Lacaille portrayed the constellations of Norma, Circinus and Triangulum Australe as a set square and ruler, a compass, and a surveyor's level respectively in a set of draughtsman's instruments in his 1756 map of the southern stars. Also depicting it as a surveyor's level, German Johann Bode gave it the alternate name of Libella in his Uranographia.