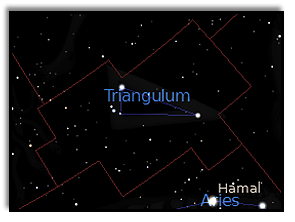 Triangulum (Tri, triangle) is a small constellation in the northern sky. Its name is Latin for "triangle", derived from its three brightest stars, which form a long and narrow triangle. The constellation contains several galaxies, the brightest and nearest of which is the Triangulum Galaxy or Messier 33 —a member of the Local Group.

Known to the ancient Babylonians and Greeks, Triangulum was one of the 48 constellations listed by the 2nd century astronomer Ptolemy. The celestial cartographers Johann Bayer and John Flamsteed (John Flamsteed FRS was an English astronomer and the first Astronomer Royal. He catalogued over 3000 stars)catalogued the constellation's stars, giving six of them Bayer designations.

The Ancient Greeks called Triangulum Deltoton, as the constellation resembled an upper-case Greek letter delta (Δ). It was transliterated by Roman writers, then later Latinised as Deltotum. Eratosthenes linked it with the Nile Delta, while the Roman writer Hyginus associated it with the triangular island of Sicily, formerly known as Trinacria due to its shape. It was also called Sicilia, because the Romans believed Ceres, patron goddess of Sicily, begged Jupiter to place the island in the heavens. Greek astronomers such as Hipparchos and Ptolemy called it Trigonon (Τρίγωνον), and later, it was Romanized as Trigonum. Other names referring to its shape include Tricuspis and Triquetrum.

Later, the 17th-century German celestial cartographer Johann Bayer called the constellation Triplicitas and Orbis terrarum tripertitus, for the three regions Europe, Asia, and Africa. Triangulus Septentrionalis was a name used to distinguish it from Triangulum Australe, the Southern Triangle. Polish astronomer Johannes Hevelius excised three faint stars to form the new constellation of Triangulum Minus in his 1690 Firmamentum Sobiescianum, renaming the original as Triangulum Majus.