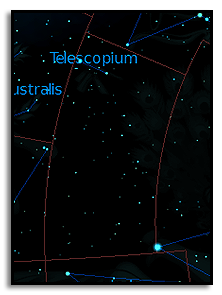 Telescopium (Tel, telescope) is a minor constellation in the southern celestial hemisphere, one of twelve created in the 18th century by French astronomer Nicolas Louis de Lacaille and one of several depicting scientific instruments. Its name is a Latinized form of the Greek word for telescope. Telescopium was later much reduced in size by Francis Baily and Benjamin Gould.

Telescopium was introduced in 1751–52 by Nicolas Louis de Lacaille with the French name le Telescope, depicting an aerial telescope. after he had observed and catalogued 10,000 southern stars during a two-year stay at the Cape of Good Hope. He devised 14 new constellations in uncharted regions of the Southern Celestial Hemisphere not visible from Europe. All but one honored instruments that symbolised the Age of Enlightenment. Covering 40 degrees of the night sky, the telescope stretched out northwards between Sagittarius and Scorpius. Lacaille had Latinised its name to Telescopium by 1763.

The constellation was also known by other names. It was called Tubus Astronomicus in the eighteenth century, during which time three constellations depicting telescopes were recognised — Tubus Herschelii Major between Gemini and Auriga and Tubus Herschelii Minor between Taurus and Orion, both of which had fallen out of use by the nineteenth century.
Telescopium Herschelii (Latin for Herschel's telescope) was a constellation created by Maximilian Hell in 1789 to honor the famous English astronomer Sir William Herschel's discovery of the planet Uranus. It was located in the constellation Auriga near the border to Lynx and Gemini. It is no longer in use.

Johann Bode called it the Astronomische Fernrohr in his 1805 Gestirne and kept its size, but later astronomers Francis Baily and Benjamin Gould subsequently shrank its boundaries.