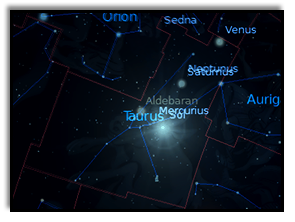 Taurus (bull, Tau) is one of the constellations of the zodiac, which means it is crossed by the plane of the ecliptic. Its name is a Latin word meaning "bull". Taurus is a large and prominent constellation in the northern hemisphere's (The Northern Hemisphere of Earth is the half that is north of the equator. For other planets in the Solar System, north is defined as being in the same celestial hemisphere relative to the invariable plane of the solar system as Earth's North pole) winter sky. It is one of the oldest constellations, dating back to at least the Early Bronze Age when it marked the location of the Sun during the spring equinox. Taurus came to symbolize the bull in the mythologies of Ancient Babylon, Egypt, and Greece.

There are a number of features of interest to astronomers. Taurus hosts two of the nearest open clusters to Earth, the Pleiades and the Hyades (Ὑάδες, also known as Melotte 25 or Collinder 50), both of which are visible to the naked eye. At first magnitude, the red giant Aldebaran (α Tau, α Tauri, Alpha Tauri) is the brightest star in the constellation. In the northwest part of Taurus is the supernova remnant Messier 1, more commonly known as the Crab Nebula. One of the closest regions of active star formation, the Taurus-Auriga complex, crosses into the northern part of the constellation. The variable star T Tauri is the prototype of a class of pre-main-sequence stars.

The identification of the constellation of Taurus with a bull is very old, certainly dating to the Chalcolithic, and perhaps even to the Upper Paleolithic . Michael Rappenglück of the University of Munich believes that Taurus is represented in a cave painting at the Hall of the Bulls in the caves at Lascaux (Lascaux Caves is the setting of a complex of caves in southwestern France famous for its Paleolithic cave paintings), which he believes is accompanied by a depiction of the Pleiades. The name "seven sisters" has been used for the Pleiades in the languages of many cultures, including indigenous groups of Australia, North America and Siberia. This suggests that the name may have a common ancient origin.

In the Mesopotamian Epic of Gilgamesh, one of the earliest works of literature, the goddess Ishtar sends Taurus, the Bull of Heaven, to kill Gilgamesh for spurning her advances. Gilgamesh is depicted as the neighboring constellation of Orion, and in the sky they face each other as if engaged in combat. In early Mesopotamian art, the Bull of Heaven was closely associated with Inanna, the Sumerian goddess of sexual love, fertility, and warfare. One of the oldest depictions shows the bull standing before the goddess' standard; since it has 3 stars depicted on its back (the cuneiform sign for "star-constellation"), there is good reason to regard this as the constellation later known as Taurus.

In Greek mythology, Taurus was identified with Zeus (Zeus is the "Father of Gods and men" who rules the Olympians of Mount Olympus, according to the ancient Greek religion. He is the god of sky and thunder in Greek mythology), who assumed the form of a magnificent white bull to abduct Europa, a legendary Phoenician princess. In illustrations of Greek mythology, only the front portion of this constellation are depicted; this was sometimes explained as Taurus being partly submerged as he carried Europa out to sea. A second Greek myth portrays Taurus as Io, a mistress of Zeus. To hide his lover from his wife Hera, Zeus changed Io into the form of a heifer. Greek mythographer Acusilaus marks the bull Taurus as the same that formed the myth of the Cretan Bull, one of The Twelve Labors of Heracles.

Taurus became an important object of worship among the Druids. Their Tauric religious festival was held while the Sun passed through the constellation. In Buddhism, legends hold that Gautama Buddha was born when the Full Moon was in Vaisakha, or Taurus.