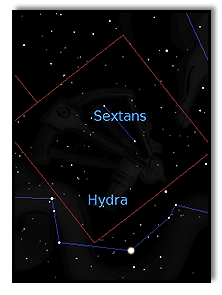 Sextans (Sex, sextant) is a minor equatorial constellation which was introduced in 1687 by Johannes Hevelius. Its name is Latin for the astronomical sextant, an instrument that Hevelius made frequent use of in his observations.

Sextans as a constellation covers a rather dim, sparse region of the sky. It has only one star above the fifth magnitude, namely Alpha Sextantis (α Sex, α Sextantis) at 4.49m. The constellation contains a few double stars, including γ, 35, and 40 Sextantis. There are a few notable variable stars, including β, 25, 23 Sextantis, and LHS 292. NGC 3115 (also called the Spindle Galaxy or Caldwell 53), an edge-on lenticular galaxy, is the only noteworthy deep-sky object. It also lies near the ecliptic, which causes the Moon, and some of the planets to occasionally pass through it for brief periods of time.