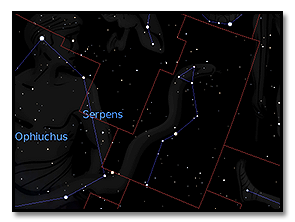 The brightest star in Serpens is Unukalhai Alpha Serpentis (α Serpentis, α Ser) or Cor Serpentis "Serpent's Heart", with an apparent magnitude of 2.63. Part of the Milky Way passes through Serpens Cauda, which is therefore rich in deep-sky objects, such as the Eagle Nebula (IC 4703) and its associated star cluster Messier 16. The nebula measures 70 light-years by 50 light-years and contains the Pillars of Creation, three dust clouds that became famous for the image taken by the Hubble Space Telescope. Located in Serpens Caput are Seyfert's Sextet, one of the densest galaxy clusters known, and Arp 220, the prototypical ultraluminous infrared galaxy. In addition, it also contains the Hercules–Corona Borealis Great Wall, the largest object in the universe.

In Greek Mythology, Serpens represents a snake held by Asclepius, a healer. Asclepius, represented in the sky by the constellation Ophiuchus, which splits Serpens into two distinct halves, was known for killing a snake that was resurrected because a different snake had placed a certain herb on it before its "death". Serpens is depicted as either winding around Ophiuchus in the night sky or simply passing through him, although the precise reason for either of these is unknown.

In some ancient atlases, the constellations Serpens and Ophiuchus were depicted as two separate constellations, although in most they were shown as a single constellation. Back in this time, there were no official constellation boundaries, so when depicted separately, their bodies were not intertwined with each other.

In Chinese astronomy, most of the stars of Serpens represented part of a wall surrounding a marketplace, known as Tianshi, which was in Ophiuchus and part of Hercules. Serpens also contains a few Chinese constellations. Two stars in the tail represented part of Shilou, the tower with the market office. Another star in the tail represented Liesi, jewel shops. One star in the head (Mu Serpentis) marked Tianru, the crown prince's wet nurse, or sometimes rain.