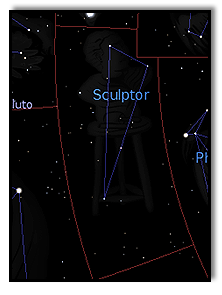 Sculptor (Scl) is a small and faint constellation in the southern sky. It represents a sculptor. It was introduced by Nicolas Louis de Lacaille in the 18th century. He originally named it Apparatus Sculptoris (the sculptor's studio), but the name was later shortened.

One unique galaxy in Sculptor is the Cartwheel Galaxy (also known as ESO 350-40), at a distance of 500 million light-years. The result of a merger around 300 million years ago, the Cartwheel Galaxy has a core of older, yellow stars, and an outer ring of younger, blue stars, which has a diameter of 100,000 light-years. The smaller galaxy in the collision is now incorporated into the core, after moving from a distance of 250,000 light-years. The shock waves from the collision sparked extensive star formation in the outer ring.