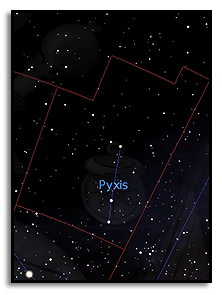 Pyxis (Pyx) is a small and faint constellation in the southern sky. Its name is Latin for a mariner's compass (it should not be confused with Circinus, which represents a draftsman's compasses). The brightest star is Alpha Pyxidis (Alpha Pyx, α Pyxidis, α Pyx) at magnitude 3.68.

Pyxis was introduced by Nicolas Louis de Lacaille in the 18th century; he called it Pyxis Nautica, but the name was shortened. The constellation is located close to those forming the old constellation of Argo Navis (the ship Argo), and in the 19th century astronomer John Herschel suggested renaming Pyxis to 'Malus, the mast', but the suggestion was not followed.

The French astronomer Nicolas Louis de Lacaille first described the constellation as la Boussole (the Marine Compass) and gave Bayer designations to ten stars now named Alpha to Lambda Pyxidis (he skipped the Greek letter iota). He renamed it Pixis [sic] Nautica on his 1763 chart. The Greeks identified the four main stars of Pyxis as the mast of the great ship.

Johann Bode (1747–1826) created the constellation Lochium Funis (the "Log and Line," a nautical device once used for measuring speed and distance traveled at sea) around Pyxis but this did not survive.

In ancient Chinese astronomy, Alpha, Beta and Gamma Pyxidis formed part of Tianmiao a Celestial Temple honouring the ancestors of the Emperor, along with stars from neighbouring Antlia (Antlia is a constellation in the southern sky).