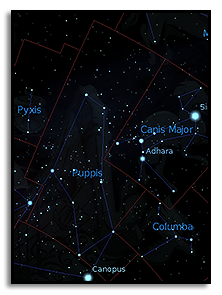 Puppis (Pup, poop deck) is a constellation in the southern sky. Puppis, the Poop Deck, was originally part of an over-large constellation, the ship of "Jason and the Argonauts", Argo Navis, which centuries after its initial description, was divided into three parts, the other two being Carina (the keel and hull), and Vela (the sails of the ship). Puppis is the largest of the three constellations in square degrees. It is one of the 88 modern constellations recognized by the International Astronomical Union (IAU).

Argo Navis was sub-divided in 1752 by the French astronomer Nicolas Louis de Lacaille, forming Puppis. Despite the division, Lacaille kept Argo's Bayer designations. Therefore Carina has the α, β and ε, Vela has γ and δ, Puppis has ζ, and so on.

As the Milky Way runs through Puppis, there are a large number of open clusters in the constellation. Messier 46 (also known as M 46 or NGC 2437) and M47 (Messier Object 47 or NGC 2422) are two open clusters in the same binocular field. M47 can be seen with the naked eye under dark skies, and its brightest stars are 6th magnitude. Messier 93 (M93) is another open cluster somewhat to the south. NGC 2451 is a very bright open cluster containing the star c Puppis and the near NGC 2477 is a good target for small telescopes. The star Pi Puppis is the main component of a bright group of stars known as Collinder 135.

M46 is a circular open cluster with an overall magnitude of 6.1 at a distance of approximately 5400 light-years from Earth. The planetary nebula NGC 2438 is superimposed; it is approximately 2900 light-years from Earth. M46 is classified as a Shapley class f and a Trumpler class III 2 m cluster. This means that it is a rich cluster that appears distinct from the star field; however, it is not at its center. The cluster's stars, numbering between 50 and 100, have a moderate range in brightness.