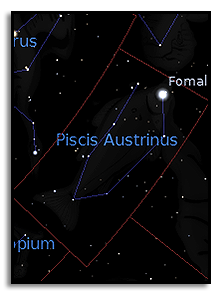 Piscis Austrinus (Piscis Australis, PsA, southern fish) is a constellation in the southern celestial hemisphere. Prior to the 20th century, it was also known as Piscis Notius. Its only star brighter than 4th magnitude is Fomalhaut, which is a first-magnitude star and is the 18th brightest star in the night sky.