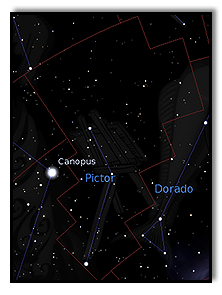 Pictor (Pic, easel) is a small faint constellation in the Southern Celestial Hemisphere, located between the brilliant star Canopus and the Large Magellanic Cloud. Latin for painter, its name is an abbreviation of the older name Equuleus Pictoris (the "painter's easel"). Normally represented as an easel, Pictor was invented and named by Abbé Nicolas Louis de Lacaille in the 18th century. The constellation's brightest star is Alpha Pictoris (α Pic, α Pictoris), a white main sequence star of apparent (visual) magnitude 3.3 around 97 light-years away from Earth. Pictor also hosts RR Pictoris, also known as Nova Pictoris 1925, a cataclysmic variable star system that flared up as a nova, reaching magnitude 1.2 in 1925 before fading into obscurity.

The French astronomer Abbé Nicolas Louis de Lacaille first described Pictor as le Chevalet et la Palette (the easel and palette) in 1756, after observing and cataloguing 10,000 southern stars during a two-year stay at the Cape of Good Hope. He devised 14 new constellations in uncharted regions of the Southern Celestial Hemisphere not visible from Europe. All but one honored instruments that symbolised the Age of Enlightenment (or simply the Enlightenment or Age of Reason). He gave these constellations Bayer designations, including ten stars in Pictor now named Alpha to Nu Pictoris. He labelled the constellation Equuleus Pictorius on his 1763 chart, the word "Equuleus" meaning ass, small horse, or easel—perhaps from an old custom among artists of carrying a canvas on a donkey. The German astronomer Johann Bode called it Pluteum Pictoris. The name was shortened to its current form in 1845 by the English astronomer Francis Baily on the suggestion of his countryman Sir John Herschel.