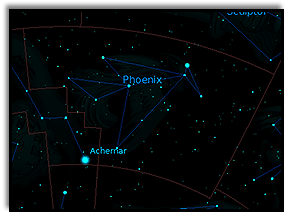 Phoenix (Phe) is a minor constellation in the southern sky. Named after the mythical phoenix, it was first depicted on a celestial atlas by Johann Bayer in his 1603 Uranometria. The French explorer and astronomer Nicolas Louis de Lacaille charted the brighter stars and gave their Bayer designations in 1756. The constellations Phoenix, Grus, Pavo and Tucana, are known as the Southern Birds.

Phoenix was the largest of the twelve constellations established by Petrus Plancius from the observations of Pieter Dirkszoon Keyser and Frederick de Houtman. It first appeared on a 35-cm diameter celestial globe published in 1597 (or 1598) in Amsterdam by Plancius with Jodocus Hondius. The first depiction of this constellation in a celestial atlas was in Johann Bayer's Uranometria of 1603. De Houtman included it in his southern star catalog the same year under the Dutch name Den voghel Fenicx, "The Bird Phoenix", symbolising the phoenix of classical mythology.

The brightest star, Alpha Phoenicis (α Phe, α Phoenicis), is named Ankaa, an Arabic word meaning 'the Phoenix'. It is an orange giant of apparent magnitude 2.4. Next is Beta Phoenicis (β Phe), actually a binary system composed of two yellow giants with a combined apparent magnitude of 3.3. Nu Phoenicis has a dust disk, while the constellation has ten star systems with known planets and the recently discovered galaxy clusters El Gordo and the Phoenix Cluster (SPT-CL J2344-4243) — located 7.2 and 5.7 billion light years away respectively, two of the largest objects in the visible universe.

The Chinese incorporated Phoenix's brightest star, Ankaa (Alpha Phoenicis), and stars from the adjacent constellation Sculptor to depict Bakui, a net for catching birds. Phoenix and the neighbouring constellation of Grus together were seen by Julius Schiller as portraying Aaron the High Priest.