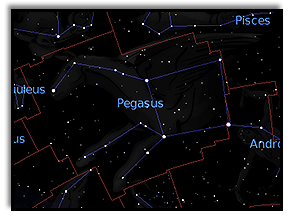 The Babylonian constellation IKU (field) had four stars of which three were later part of the Greek constellation Hippos (Pegasus). Pegasus, in Greek mythology, was a winged horse with magical powers. One myth regarding his powers says that his hooves dug out a spring, Hippocrene, which blessed those who drank its water with the ability to write poetry. Pegasus was the one who delivered Medusa's head to Polydectes, after which he travelled to Mount Olympus in order to be the bearer of thunder and lightning for Zeus. Eventually, he became the horse to Bellerophon, who was asked to kill the Chimera and succeeded with the help of Athena and Pegasus. Despite this success, after the death of his children, Bellerophon asked Pegasus to take him to Mount Olympus. Though Pegasus agreed, he plummeted back to Earth after Zeus either threw a thunderbolt at him or made Pegasus buck him off.

In ancient Persia, Pegasus was depicted by al-Sufi as a complete horse facing east, unlike most other uranographers, who had depicted Pegasus as half of a horse, rising out of the ocean. In al-Sufi's depiction, Pegasus's head is made up of the stars of Lacerta the lizard.

With an apparent magnitude varying between 2.37 and 2.45, the brightest star in Pegasus is the orange supergiant Epsilon Pegasi (ε Peg, ε Pegasi), also known as Enif, which marks the horse's muzzle. Alpha (Markab), Beta (Scheat), and Gamma (Algenib), together with Alpha Andromedae (Alpheratz or Sirrah) form the large asterism known as the Square of Pegasus. Twelve star systems have been found to have exoplanets.