Orion (Ori) is a prominent constellation located on the celestial equator and visible throughout the world. It is one of the most conspicuous and recognizable constellations in the night sky. It was named after Orion, a hunter in Greek mythology. Its brightest stars are Rigel (Beta Orionis) and Betelgeuse (Alpha Orionis), a blue-white and a red supergiant.

The earliest depiction that has been linked to the constellation of Orion is a prehistoric (Aurignacian) mammoth ivory carving found in a cave in the Ach valley in Germany in 1979. Archaeologists have estimated it to have been fashioned approximately 32,000 to 38,000 years ago. The distinctive pattern of Orion has been recognized in numerous cultures around the world, and many myths have been associated with it. It has also been used as a symbol in the modern world. 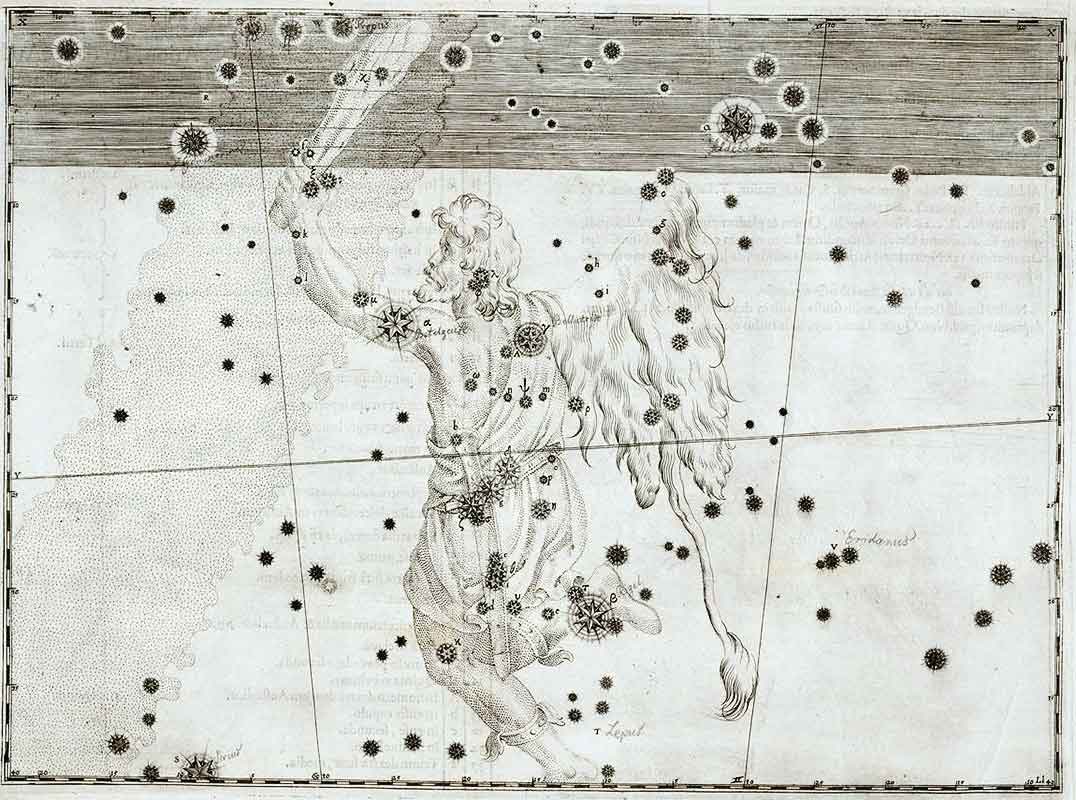 In ancient Egypt, the stars of Orion were regarded as a god, called Sah. Because Orion rises before Sirius, the star whose heliacal rising was the basis for the Solar Egyptian calendar, Sah was closely linked with Sopdet, the goddess who personified Sirius. The god Sopdu was said to be the son of Sah and Sopdet. Sah was syncretized with Osiris, while Sopdet was syncretized with Osiris' mythological wife, Isis. In the Pyramid Texts, from the 24th and 23rd centuries BC, Sah was one of many gods whose form the dead pharaoh was said to take in the afterlife.

The Armenians identified their legendary patriarch and founder Hayk with Orion. Hayk is also the name of the Orion constellation in the Armenian translation of the Bible. In ancient Aram, the constellation was known as Nephîlā′, the Nephilim may have been Orion's descendants.

Orion in the 9th century Leiden Aratea.
Orion's current name derives from Greek mythology, in which Orion was a gigantic, supernaturally strong hunter of ancient times, born to Euryale, a Gorgon, and Poseidon (Neptune), god of the sea in the Graeco-Roman tradition. One myth recounts Gaia's rage at Orion, who dared to say that he would kill every animal on the planet. The angry goddess tried to dispatch Orion with a scorpion. This is given as the reason that the constellations of Scorpius and Orion are never in the sky at the same time. However, Ophiuchus, the Serpent Bearer, revived Orion with an antidote. This is said to be the reason that the constellation of Ophiuchus stands midway between the Scorpion and the Hunter in the sky.

In medieval Muslim astronomy, Orion was known as al-jabbar, "the giant". Orion's sixth brightest star, Saiph, is named from the Arabic, saif al-jabbar, meaning "sword of the giant".

The Chinese character 參 (pinyin shēn) originally meant the constellation Orion (Chinese: 參宿; pinyin: shēnxiù); its Shang dynasty version, over three millennia old, contains at the top a representation of the three stars of Orion's belt atop a man's head (the bottom portion representing the sound of the word was added later). 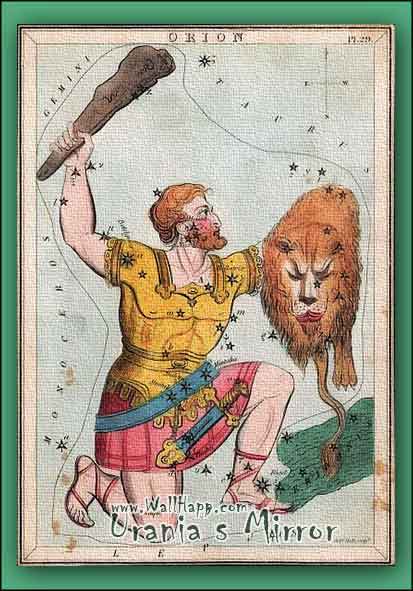 The Rig Veda refers to the Orion Constellation as Mriga (The Deer). It is said that two bright stars in the front and two bright stars in the rear are The hunting dogs, the one comparatively less bright star in the middle and ahead of two front dogs is The hunter and three aligned bright stars are in the middle of all four hunting dogs is The Deer (The Mriga) and three little aligned but less brighter stars is The Baby Deer. The Mriga means Deer, locally known as Harnu in folk parlance. There are many folk songs narrating the Harnu. The Malay called Orion' Belt Bintang Tiga Beradik (the "Three Brother Star").

In old Hungarian tradition, "Orion" is known as (magic) Archer (Íjász), or Reaper (Kaszás). In recently rediscovered myths he is called Nimrod (Hungarian "Nimród"), the greatest hunter, father of the twins "Hunor" and "Magor"). The "π" and "o" stars (on upper right) form together the reflex bow or the lifted scythe. In other Hungarian traditions, "Orion's belt" is known as "Judge's stick" (Bírópálca). In Scandinavian tradition, "Orion's belt" was known as Frigg's Distaff (friggerock) or Freyja's distaff. The Finns call the Orion's belt and the stars below it as Väinämöisen viikate (Väinämöinen's scythe). Another name for the asterism of Alnilam, Alnitak and Minkata is Väinämöisen vyö' (Väinämöinen's Belt) and the stars "hanging" from the belt as Kalevanmiekka (Kaleva's sword). In Siberia, the Chukchi people see Orion as a hunter; an arrow he has shot is represented by Aldebaran (Alpha Tauri), with the same figure as other Western depictions.

The Seri people of northwestern Mexico call the three stars in the belt of Orion Hapj (a name denoting a hunter) which consists of three stars: Hap (mule deer), Haamoja (pronghorn), and Mojet (bighorn sheep). Hap is in the middle and has been shot by the hunter; its blood has dripped onto Tiburón Island.

To the Lakota Native Americans, Tayamnicankhu (Orion’s Belt) is the spine of a bison. The great rectangle of Orion are the bison's ribs; the Pleiades star cluster in nearby Taurus is the bison’s head; and Sirius in Canis Major, known as Tayamnisinte, is its tail.