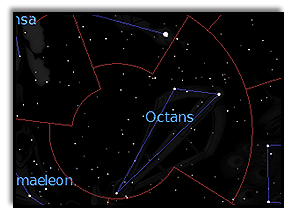 Octans (Oct, octant) is a faint constellation of the southern sky. Its name is Latin for the eighth part of a circle, but it is named after the octant, a navigational instrument.

Octans was created by Nicolas Louis de Lacaille in 1759 out of faint circumpolar stars. Originally, it was known as "Octans Hadleianus" in honor of the octant's inventor, John Hadley, who devised it in 1730. There is no real mythology related to Octans, partially due to its extreme southerly latitude.

Octans is notable as the location of the south celestial pole. Unlike the north pole, it has no bright pole star: Sigma Octantis (σ Oct, σ Octantis) is a naked-eye star very close to the pole, but it is so faint (mag. +5.45) that it is practically useless for navigation purposes. Conveniently for navigators, the constellation Crux, the Southern Cross, points toward the pole.