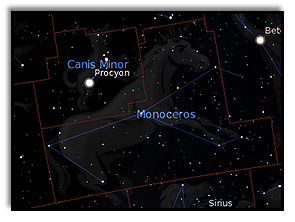 Monoceros (Mon, unicorn) is a faint constellation on the celestial equator. Its name is Greek for unicorn. Its definition is attributed to the 17th-century Dutch cartographer Petrus Plancius. It is bordered by Orion to the west, Gemini to the north, Canis Major to the south and Hydra to the east. Other bordering constellations include Canis Minor, Lepus and Puppis.

Monoceros is a relatively modern constellation. Its first certain appearance was on a globe created by the Dutch cartographer Petrus Plancius in 1612 or 1613 and it was later charted by Jakob Bartsch as Unicornu on his star chart of 1624.

Heinrich Wilhelm Matthias Olbers and Christian Ludwig Ideler indicate (according to Richard Hinkley Allen's allegations) that the constellation may be older, quoting an astrological work from 1564 that mentioned "the second horse between the Twins and the Crab has many stars, but not very bright"; these references may ultimately be due to Michael Scot of the 13th century, but refer to a horse and not a unicorn, and its position does not quite match. Joseph Scaliger is reported to have found Monoceros on an ancient Persian sphere.