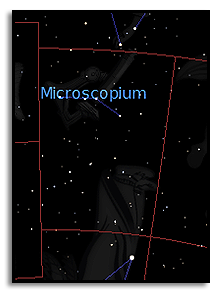 Microscopium (Mic, microscope) is a small constellation in the southern sky, defined in the 18th century by Nicolas Louis de Lacaille. The stars that now comprise Microscopium may formerly have belonged to the hind feet of Sagittarius. However, this is uncertain as, while its stars seem to be referred to by Al-Sufi as having been seen by Ptolemy, Al-Sufi does not specify their exact positions.

Lacaille charted and designated ten stars with the Bayer designations Alpha (Alpha Mic, α Microscopii, α Mic) through to Iota in 1756. A star in neighbouring Indus that Lacaille had labelled Nu Indi turned out to be in Microscopium, so Gould renamed it Nu Microscopii. Within the constellation's borders, there are 43 stars brighter than or equal to apparent magnitude 6.5.