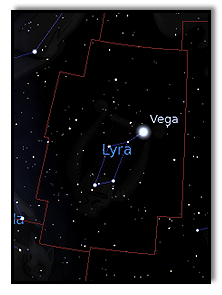 Lyra (Lyr, harp) is a small constellation. It is one of 48 listed by the 2nd century astronomer Ptolemy, and is one of the 88 constellations recognized by the International Astronomical Union (IAU). Its principal star, Vega (α Lyr, α Lyrae, Alpha Lyrae), a corner of the Summer Triangle, is one of the brightest stars in the sky. Beginning at the north, Lyra is bordered by Draco, Hercules, Vulpecula, and Cygnus.

In the past, Lyra was often represented on star maps as a vulture or an eagle carrying a lyre, either enclosed in its wings, or in its beak. It was sometimes referred to as Aquila Cadens or Vultur Cadens (falling eagle or falling vulture). This historical association is preserved in the name of its brightest star, Vega, which is derived from an Arabic term meaning "swooping eagle."

In Greek mythology, Lyra was associated with the myth of Orpheus, the musician who was killed by the Bacchantes. After his death, his lyre was thrown into the river; Zeus sent an eagle to retrieve the lyre, and ordered both of them to be placed in the sky. In Wales, Lyra is known as King Arthur's Harp (Talyn Arthur), and King David's harp . The Persian Hafiz called it the Lyre of Zurah. It has been called the Manger of the Infant Saviour, Praesepe Salvatoris.

In Japanese mythology, originating from the Chinese Qixi festival, Vega is sometimes called Tanabata (or Orihime), a celestial princess or goddess. She falls in love with a mortal, Kengyu (or Hikoboshi), represented by the star Altair. But when Tanabata’s father finds out, he is enraged and forbids her to see this mere mortal. Thus the two lovers are placed in the sky, where they are separated by the Celestial River, known to us as Milky Way. Yet the sky gods are kind. Each year, on the 7th night of the 7th moon, a bridge of magpies forms across the Celestial River, and the two lovers are reunited. Sometimes Kengyu’s annual trip across the Celestial River is treacherous, though, and he doesn’t make it. In that case, Tanabata’s tears form raindrops that fall over Japan.

Many Japanese celebrations of Tanabata (Tanabata is a Japanese star festival, originating from the Chinese Qixi Festival) are held in July, but sometimes they are held in August. If it rains, the raindrops are thought to be Tanabata’s tears because Kengyu could not meet her. Sometimes the meteors of the Perseid shower are said to be Tanabata’s tears.