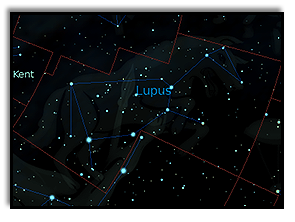 Lupus (Lup, wolf) is a constellation in the southern sky. Its name is Latin for wolf. Lupus was one of the 48 constellations listed by the 2nd century astronomer Ptolemy, and it remains one of the 88 modern constellations. It lies between Centaurus and Scorpius.

In ancient times, the constellation was considered an asterism within Centaurus, and was considered to have been an arbitrary animal, killed, or about to be killed, on behalf of, or for, Centaurus. An alternative visualization, attested by Eratosthenes (Eratosthenes of Cyrene was a Greek mathematician, geographer, poet, astronomer, and music theorist), saw this constellation as a wineskin held by Centaurus. It was not separated from Centaurus until Hipparchus of Bithynia named it Therion (meaning beast) in the 200s BC. No particular animal was associated with it until the Latin translation of Ptolemy's work identified it with the wolf.

The Greek constellation is probably based on the Babylonian figure known as the Mad Dog (UR.IDIM). This was a strange hybrid creature that combined the head and torso of a man with the legs and tail of a lion (the cuneiform sign 'UR' simply refers to a large carnivore; lions, wolves and dogs are all included). It is often found in association with the sun god and another mythical being called the Bison-man, which is supposedly related to the Greek constellation of Centaurus.