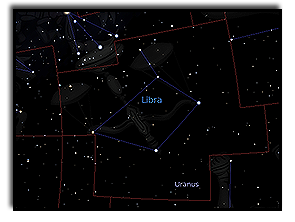 Libra (Lib, balance) is a constellation of the zodiac. Its name is Latin for weighing scales. It is fairly faint, with no first magnitude stars, and lies between Virgo to the west and Scorpius to the east.

Libra was known in Babylonian astronomy as MUL Zibanu (the "scales" or "balance"), or alternatively as the Claws of the Scorpion. The scales were held sacred to the sun god Shamash, who was also the patron of truth and justice. It was also seen as the Scorpion's Claws in ancient Greece. Since these times, Libra has been associated with law, fairness and civility. In Arabic zubānā means "scorpion's claws", and likely similarly in other Semitic languages: this resemblance of words may be why the Scorpion's claws became the Scales. It has also been suggested that the scales are an allusion to the fact that when the sun entered this part of the ecliptic at the autumnal equinox, the days and nights are equal. Libra's status as the location of the equinox earned the equinox the name "First Point of Libra", though its position ended in 730 because of the precession of the equinoxes.

Libra is a constellation not mentioned by Eudoxus (Eudoxus of Cnidus was a Greek astronomer, mathematician, scholar and student of Plato) or Aratus. In Roman mythology, Libra is considered to depict the scales held by Astraea (identified as Virgo), the goddess of justice. Libra is mentioned by Manetho (3rd century B.C.) and Geminus (1st century B.C.), and included by Ptolemy in his 48 asterisms. Ptolemy catalogued 17 stars, Tycho Brahe 10, and Johannes Hevelius 20. It only became a constellation in ancient Rome, when it began to represent the scales held by Astraea, associated with Virgo.