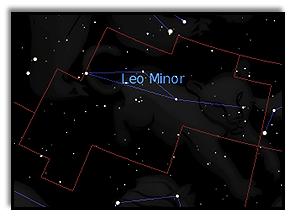 Leo Minor (LMi) is a small and faint constellation in the northern celestial hemisphere. Its name is Latin for "the smaller lion", in contrast to Leo, the larger lion. It lies between the larger and more recognizable Ursa Major to the north and Leo to the south. Leo Minor was not regarded as a separate constellation by classical astronomers; it was designated by Johannes Hevelius in 1687. 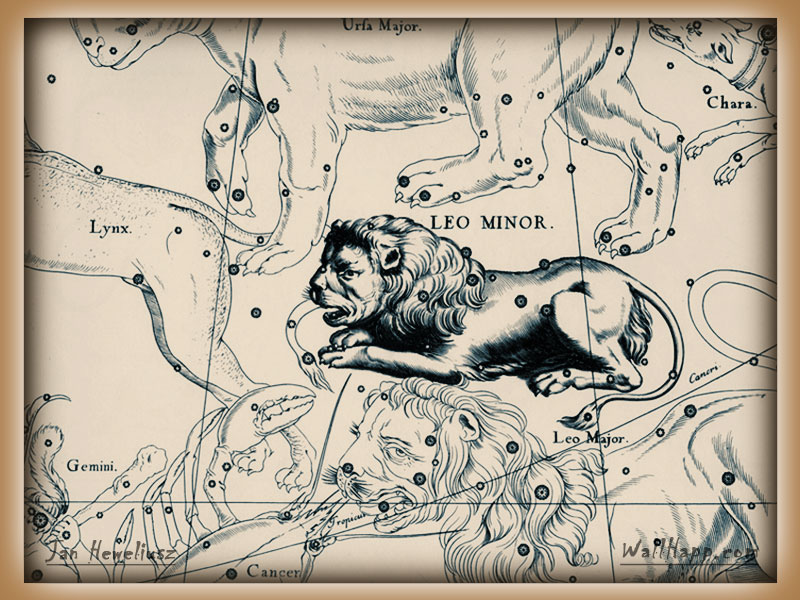 The classical astronomers Aratus and Ptolemy had noted the region of what is now Leo Minor to be undefined and not containing any distinctive pattern; Ptolemy classified the stars in this area as amorphōtoi (not belonging to a constellation outline) within the constellation Leo.

Johannes Hevelius first depicted Leo Minor in 1687 when he outlined ten new constellations in his star atlas Firmamentum Sobiescianum, and included 18 of its objects in the accompanying Catalogus Stellarum Fixarum. Hevelius decided upon Leo Minor or Leo Junior as a depiction that would align with its beastly neighbours the Lion and the Great Bear. In 1845, English astronomer Francis Baily revised the catalogue of Hevelius's new constellations, and assigned a Greek letter known as Bayer designation to stars brighter than apparent magnitude 4.5 (The apparent magnitude (m) of a celestial body is a measure of its brightness as seen by an observer on Earth, adjusted to the value it would have in the absence of the atmosphere.
). Richard A. Proctor gave the constellation the name Leaena "the Lioness" in 1870, explaining that he sought to shorten the constellation names to make them more manageable on celestial charts.

German astronomer Christian Ludwig Ideler posited that the stars of Leo Minor had been termed Al Thibā' wa-Aulāduhā "Gazelle with her Young" on a 13th-century Arabic celestial globe, recovered by Cardinal Stefano Borgia and housed in the prelate's museum at Velletri. Arabist Friedrich Wilhelm Lach describes a different view, noting that they had been seen as Al Haud "the Pond", which the Gazelle jumps into. In Chinese astronomy, the stars Beta, 30, 37 and 46 Leonis Minoris made up Neiping, a "Court of Judge or Mediator", or Shi "Court Eunuch" or were combined with stars of the neighbouring Leo to make up a large celestial dragon or State Chariot. A line of four stars was known as Shaowei; it represented four Imperial advisors and may have been located in Leo Minor, Leo or adjacent regions.