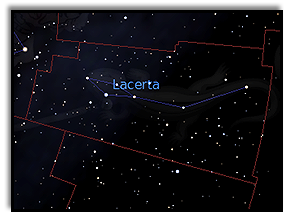 Lacerta (Lizard, Lac) is one of the 88 modern constellations defined by the International Astronomical Union (IAU).

Its name is Latin for lizard. A small, faint constellation, it was created in 1687 by the astronomer Johannes Hevelius (As an astronomer he gained a reputation as "the founder of lunar topography" and described ten new constellations, seven of which are still recognized by astronomers). Its brightest stars form a "W" shape similar to that of Cassiopeia, and it is thus sometimes referred to as 'Little Cassiopeia'. It is located between Cygnus, Cassiopeia and Andromeda on the northern celestial sphere.

Centred on a region of the sky without apparently bright stars, Lacerta was apparently not regarded as a constellation by ancient Western astronomers. Johannes Hevelius created the constellation in 1687 and initially christened it "Stellio", a newt with star-like dorsal spots found along the Mediterranean coast.