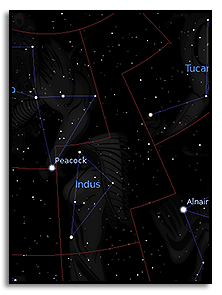 Indus (Ind, Indian) is a constellation in the southern sky. Created in the late sixteenth century, it represents an Indian, a word that could refer at the time to any native of Asia or the Americas.

The constellation was one of twelve created by Petrus Plancius from the observations of Pieter Dirkszoon Keyser and Frederick de Houtman and it first appeared on a 35-cm diameter celestial globe published in 1597 (or 1598) in Amsterdam by Plancius with Jodocus Hondius. The first depiction of this constellation in a celestial atlas was in Johann Bayer's Uranometria of 1603. Plancius portrayed the figure as a nude male with arrows in both hands but no bow.

Epsilon Indi (ε Ind, ε Indi) is one of the closest stars to Earth, approximately 11.8 light years away. It is an orange dwarf of magnitude 4.7, meaning that the yellow dwarf Sun is slightly hotter and larger. The system has been discovered to contain a pair of binary brown dwarfs, and has long been a prime candidate in SETI studies (The search for extraterrestrial intelligence (SETI) is the collective name for a number of activities undertaken to search for intelligent extraterrestrial life).