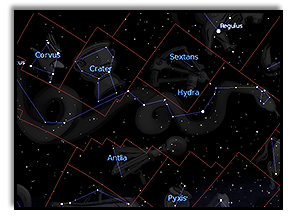 Hydra (Hya) is the largest of the 88 modern constellations, measuring 1303 square degrees. Also one of the longest at over 100 degrees, its southern end abuts Libra and Centaurus and its northern end borders Cancer. It has a long history, having been included among the 48 constellations listed by the 2nd century astronomer Ptolemy. It is commonly represented as a water snake. It should not be confused with the similarly named constellation of Hydrus.

The shape of Hydra resembles a twisting snake, and features as such in some Greek myths. One myth associates it with a water snake that a crow served Apollo in a cup when it was sent to fetch water; Apollo (Apollo is one of the most important and complex of the Olympian deities in classical Greek and Roman religion and Greek and Roman mythology) saw through the fraud, and angrily cast the crow, cup, and snake, into the sky. It is also associated with the monster Hydra, with its many heads, killed by Hercules, represented in another constellation. According to legend, if one of the hydra's heads was cut off, two more would grow in its place. However, Hercules burned out the roots of the heads he severed to prevent them from growing again, and thus overcame the hydra.