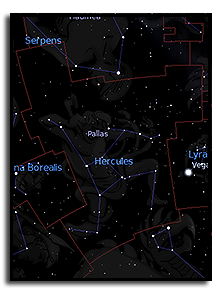 Hercules contains two bright globular clusters: Messier 13 (M13), the brightest globular cluster in the northern hemisphere, and Messier 92 (also known as M92 or NGC 6341). It also contains the nearly spherical planetary nebula Abell 39. M13 lies between the stars η Her and ζ Her; it is dim, but may be detected by the unaided eye on a very clear night.

According to Gavin White, the Greek constellation of Hercules is a distorted version of the Babylonian constellation known as the "Standing Gods" (MUL.DINGIR.GUB.BA.MESH). White argues that this figure was, like the similarly named "Sitting Gods", depicted as a man with a serpent's body instead of legs (the serpent element now being represented on the Greek star map by the figure of Draco that Hercules crushes beneath his feet). He further argues that the original name of Hercules - the 'Kneeler' - is a conflation of the two Babylonian constellations of the Sitting and Standing Gods...