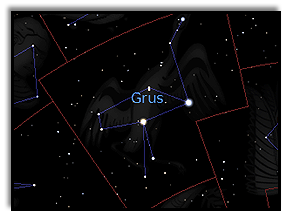 Grus (Gru, Crane) is a constellation in the southern sky. Its name is Latin for the crane, a type of bird. The stars that form Grus were originally considered part of the neighbouring constellation Piscis Austrinus (the southern fish), with Gamma Gruis (Gamma Gru, γ Gruis, γ Gru) seen as part of the fish's tail.

The stars were first defined as a separate constellation by the Dutch astronomer Petrus Plancius, who created twelve new constellations based on the observations of the southern sky by the Dutch explorers Pieter Dirkszoon Keyser and Frederick de Houtman, who had sailed on the first Dutch trading expedition, known as the Eerste Schipvaart, to the East Indies. Grus first appeared on a 35-cm diameter celestial globe published in 1598 in Amsterdam by Plancius with Jodocus Hondius. Its first depiction in a celestial atlas was in the German cartographer Johann Bayer's Uranometria of 1603. De Houtman included it in his southern star catalog the same year under the Dutch name Den Reygher, "The Heron", however Bayer followed Plancius and Hondius in using Grus.

An alternative name for the constellation, Phoenicopterus (Latin "flamingo"), was used briefly during the early 17th century, seen in the 1605 work Cosmographiae Generalis by Paul Merula of Leiden University and a c. 1625 globe by Dutch globe maker Pieter van den Keere. Astronomer Ian Ridpath has reported the symbolism likely came from Plancius originally, who had worked with both of these people. Grus and the nearby constellations Phoenix, Tucana and Pavo are collectively called the "Southern Birds".

The stars that correspond to Grus were generally too far south to be seen from China. In Chinese astronomy, Gamma and Lambda Gruis may have been included in the tub-shaped asterism Bàijiù, along with stars from Piscis Austrinus. In Central Australia, the Arrernte and Luritja people living on a mission in Hermannsburg viewed the sky as divided between them, east of the Milky Way representing Arrernte camps and west denoting Luritja camps. Alpha Gruis (α Gruis, α Gru) and Beta Gruis (β Gruis, β Gru), along with Fomalhaut, Alpha Pavonis and the stars of Musca, were all claimed by the Arrernte.