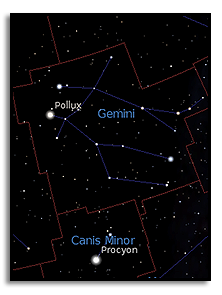 In Babylonian astronomy, the stars Castor and Pollux were known as the Great Twins (MUL.MASH.TAB.BA.GAL.GAL). The Twins were regarded as minor gods and were called Meshlamtaea and Lugalirra, meaning respectively 'The One who has arisen from the Underworld' and the 'Mighty King'. Both names can be understood as titles of Nergal, the major Babylonian god of plague and pestilence, who was king of the Underworld.

In Greek mythology, Gemini was associated with the myth of Castor and Pollux, the children of Leda and Argonauts both. Pollux was the son of Zeus, who seduced Leda, while Castor was the son of Tyndareus, king of Sparta and Leda's husband. Castor and Pollux were also mythologically associated with St. Elmo's fire in their role as the protectors of sailors. When Castor died, because he was mortal, Pollux begged his father Zeus to give Castor immortality, and he did, by uniting them together in the heavens.