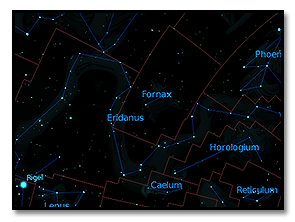 According to one theory, the Greek constellation takes its name from the Babylonian constellation known as the Star of Eridu. Eridu was an ancient city in the extreme south of Babylonia; situated in the marshy regions it was held sacred to the god Enki-Ea who ruled the cosmic domain of the Abyss - a mythical conception of the fresh-water reservoir below the Earth's surface.

Eridanus is connected to the myth of Phaëton, who took over the reins of his father Helios' (Helios was the personification of the Sun in Greek mythology) sky chariot, but didn't have the strength to control it and so veered wildly in different directions, scorching both earth and heaven. Zeus intervened by striking Phaëton dead with a thunderbolt and casting him to earth. The constellation was supposed to be the path Phaëton drove along; in later times, it was considered a path of souls. Since Eridanos was also a Greek name for the Po (Latin Padus), in which the burning body of Phaëton is said by Ovid to have extinguished, the mythic geography of the celestial and earthly Eridanus is complex.

Another association with Eridanus is a series of rivers all around the world. First conflated with the Nile River in Egypt, the constellation was also identified with the Po River in Italy. The stars of the modern constellation Fornax were formerly a part of Eridanus.