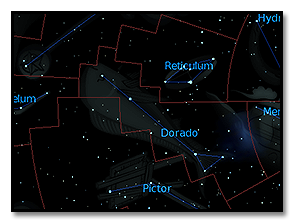 Dorado (Dor, goldfish) is a constellation in the southern sky. It was named in the late 16th century and is now one of the 88 modern constellations. Its name refers to the dolphinfish (Coryphaena hippurus), which is known as dorado in Portuguese, although it has also been depicted as a swordfish. Dorado is notable for containing most of the Large Magellanic Cloud, the remainder being in the constellation Mensa. The South ecliptic pole also lies within this constellation.

Even though the name Dorado is not Latin but Portuguese, astronomers give it the Latin genitive form Doradus when naming its stars; they are treating it (like the adjacent constellation Argo Navis) as if it were a feminine proper name of Greek origin ending in -ō (like Io or Callisto or Argo), names that have a genitive ending in -ūs.

Dorado was one of twelve constellations named by Petrus Plancius from the observations of Pieter Dirkszoon Keyser and Frederick de Houtman, and it first appeared on a 35-cm diameter celestial globe published in 1597 (or 1598) in Amsterdam by Plancius with Jodocus Hondius. Its first depiction in a celestial atlas was in Johann Bayer's Uranometria of 1603 where it was also named Dorado. Dorado has been represented historically as a dolphinfish and a swordfish; the latter depiction is inaccurate. It has also been represented as a goldfish. The constellation was also known in the 17th and 18th century as Xiphias, the swordfish, first attested in Johannes Kepler's edition of Tycho Brahe's star list in the Rudolphine Tables of 1627. The name Dorado ultimately become dominant and was adopted by the International Astronomical Union (IAU).