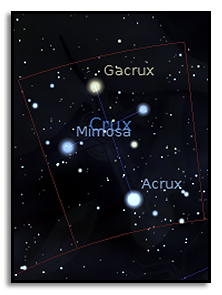 Crux (Cru, southern cross), located in the deep southern sky, is the smallest yet one of the most distinctive of the 88 modern constellations. Its name is Latin for cross, and it is dominated by a cross-shaped asterism that is commonly known as the Southern Cross. Although visible to the Ancient Greeks, it was seen as part of the constellation Centaurus, and not defined or accurately mapped till the 16th century.

Crux was visible to the Ancient Greeks; Ptolemy regarded it as part of the constellation Centaurus. It was entirely visible as far north as Britain in the fourth millennium BC.

Another early modern description clearly describing Crux as a separate constellation is attributed to Andreas Corsali, an Italian navigator who from 1515 to 1517 sailed to China and the East Indies in an expedition sponsored by King Manuel I. In 1516, Corsali wrote a letter to the monarch describing his observations of the southern sky, which included a small map showing 19 stars and the two Magellanic Clouds in a geocentric orientation, along with a vivid textual description of the Southern Cross.

Emery Molyneux and Petrus Plancius have also been cited as the first uranographers to distinguish Crux as a separate constellation; their representations date from 1592, the former depicting it on his celestial globe and the latter in one of the small celestial maps on his large wall map. Both authors, however, depended on unreliable sources and placed Crux in the wrong position. Crux was first shown in its correct position on the celestial globes of Petrus Plancius and Jodocus Hondius in 1598 and 1600. Its stars were first catalogued separately from Centaurus by Frederick de Houtman in 1603. Later adopters of the constellation included Jakob Bartsch in 1624 and Augustin Royer in 1679. Royer is sometimes wrongly cited as initially distinguishing Crux.