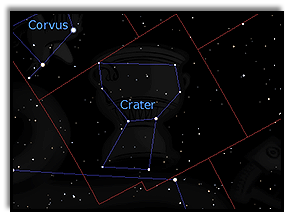 Crater (Crt, cup) is a constellation. Its name is Latin for cup, and in Greek mythology it is identified with the cup of the god Apollo. It was one of the 48 constellations listed by the 2nd century astronomer Ptolemy, and remains one of the 88 modern constellations.

Crater is identified with a story from Greek mythology in which a crow or raven serves Apollo, and is sent to fetch water, but it rests lazily on the journey, and after finally obtaining the water in a cup, takes back a water snake as an excuse. According to the myth, Apollo saw through the fraud, and angrily cast the crow, cup, and snake, into the sky. The constellations of Corvus the crow and Hydra the water-snake are also identified with this myth.

In Chinese astronomy, the stars of Crater are located within the constellation of the Vermillion Bird of the South.