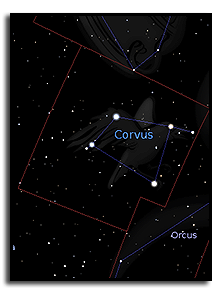 Corvus (Crv, crow) is a small constellation in the Southern Celestial Hemisphere. Its name comes from the Latin word "raven" or "crow". It includes only 11 stars with brighter than 4.02 magnitudes. One of the 48 constellations listed by the 2nd-century astronomer Ptolemy, it remains one of the 88 modern constellations. The four brightest stars, Gamma Corvi (γ Crv, γ Corvi), Delta Corvi (δ Crv, δ Corvi), Epsilon Corvi (ε Crv, ε Corvi), and Beta Corvi (Beta Crv, β Corvi, β Crv) from a distinctive quadrilateral in the night sky.

The Greek figure of Corvus is modeled on the Babylonian Raven (MUL.UGA.MUSHEN), which was similarly placed sitting on the tail of the Serpent (Greek Hydra). The Babylonian constellation was sacred to Adad, the god of rain and storm; in the second Millennium it would have risen just before the start of the autumnal rainy season.

One myth associated with Corvus is that of Apollo and Coronis. Coronis had been unfaithful to her lover, who learned this information from a pure white crow. Apollo then turned its feathers black in a fit of rage.

Another legend associated with Corvus is that a crow stopped on his way to fetch water for Apollo, in order to eat figs. Instead of telling the truth to Apollo, he lied and said that a snake, Hydra, kept him from the water, while holding a snake in his talons as proof. Apollo saw this to be a lie, however, and flung the crow (Corvus), cup (Crater), and the snake (Hydra) into the sky. He further punished the wayward bird by making sure that it would forever be thirsty, both in real life and in the heavens, where the Cup is barely out of reach.