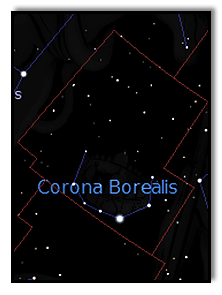 Corona Borealis (CrB, northern crown) is a small constellation in the Northern Celestial Hemisphere. It is the northern counterpart of Corona Australis, the southern crown. One of the 48 constellations listed by the 2nd-century astronomer Ptolemy, it remains one of the 88 modern constellations.

In Greek mythology, Corona Borealis was sometimes considered to represent a crown that was given by Dionysus to Ariadne, the daughter of Minos of Crete. When she wore the crown to her wedding, where she married Dionysus, he placed her crown in the heavens to commemorate the wedding. In Welsh mythology, it was called Caer Arianrhod, "the Castle of the Silver Circle", and was the heavenly abode of the Lady Arianrhod.

The brightest star is the 2.2-magnitude Alpha Coronae Borealis (α CrB, α Coronae Borealis, Alphecca) is a binary star in the constellation Corona Borealis. It is located about 75 light years from the Solar System). Four star systems have been found to have exoplanets to date; three of these are orange giants, while the fourth — Rho Coronae Borealis (ρ CrB, ρ Coronae Borealis) — is a solar twin, very like our own Sun. The yellow supergiant R Coronae Borealis is the prototype of a rare class of unusual stars — the R Coronae Borealis variables (abbreviated RCB, RCrB) —that are extremely hydrogen deficient, and thought to result from the merger of two white dwarfs. Abell 2065 is a highly concentrated galaxy cluster located one billion light-years from our Solar System containing over 400 members, the brightest of which are 16th magnitude.