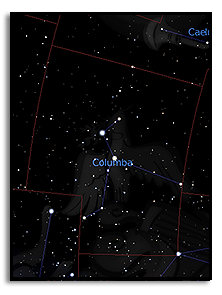 Columba (Col, dove) is a small, faint constellation created in the late sixteenth century. Its name is Latin for dove. It is located just south of Canis Major and Lepus.

Columba was created by Dutch astronomer Petrus Plancius in 1592 in order to differentiate the 'unformed stars' of the large constellation Canis Major CMa. Plancius first depicted Columba on the small celestial planispheres of his large wall map of 1592. It is also shown on his smaller world map of 1594 and on early Dutch celestial globes.

Seen as "Columba Noachi" in Urania's Mirror (1825)
Plancius originally named the constellation Columba Noachi ("Noah's Dove"), referring to the dove that gave Noah the information that the Great Flood was receding. This name is found on early 17th-century celestial globes and star atlases (such as Bayer's Uranometria of 1603). Columba may also represent the dove released by Jason and the Argonauts at the Black Sea's mouth; it helped them navigate the dangerous Symplegades.

Although the Plancius is credited with the creation of Columba, the existence of a "dove" constellation was attested to by Clement of Alexandria (c. 150-215), although it is not known whether the same group of stars was contemplated. In addition, given the mythological linkage of Columba with Jason and the Argonauts, the celestial location of Columba over Puppis, part of the larger constellation once known as Argo Navis (the ship of the Argonauts), supports an ancient derivation of this constellation, despite its notable omission by Ptolemy.

In the Society Islands, Alpha Columbae (Phact) was called Ana-iva.