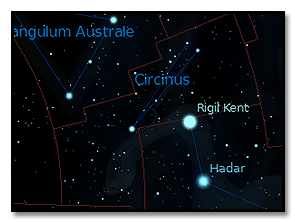 Circinus (Cir) is a small faint constellation in the southern sky, first defined in 1756 by French astronomer Nicolas Louis de Lacaille. Its name is Latin for compass, referring to the drafting tool used for drawing circles (it should not be confused with Pyxis, a constellation that represents a mariner's compass which points north).

In 1756, French astronomer Nicolas Louis de Lacaille introduced the constellation of Circinus with the French name le Compas, representing a pair of dividing compasses. It had first been depicted on one of Lacaille's maps in 1754, but it was unnamed. Lacaille portrayed the constellations of Norma, Circinus and Triangulum Australe, respectively, as a set square and ruler, a compass, and a surveyor's level in a set of draughtsman instruments, in his 1756 map of the southern stars. Circinus was given its current name in 1763, when Lacaille published an updated sky map with Latin names for the constellations he introduced.