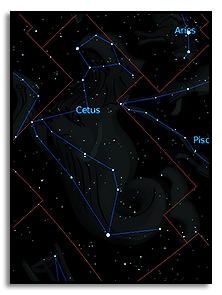 Cetus (Cet) is a constellation. Its name refers to Cetus, a sea monster in Greek mythology, although it is often called 'the whale' today.

The most notable star in Cetus is Mira (also known as Omicron Ceti, ο Ceti, ο Cet) ("the Wonderful"), designated Omicron Ceti, the first variable star to be discovered and the prototype of its class. Over a period of 332 days it reaches a maximum apparent magnitude of 3 - visible to the naked eye - and dips to a minimum magnitude of 10, invisible to the unaided eye. Its seeming appearance and disappearance gave it its common name, which means "the amazing one". Mira pulsates with a minimum size of 400 solar diameters and a maximum size of 500 solar diameters. 420 light-years from Earth, it was discovered by David Fabricius in 1596.

Cetus may have originally been associated with a whale, which would have had mythic status amongst Mesopotamian cultures. It is often now called the Whale, though it is most strongly associated with Cetus the sea-monster, who was slain by Perseus as he saved the princess Andromeda from Poseidon's wrath. Cetus is located in a region of the sky called "The Sea" because many water-associated constellations are placed there, including Eridanus, Pisces, Piscis Austrinus, Capricornus, and Aquarius.

Cetus has been depicted many ways throughout its history. In the 17th century, Cetus was depicted as a "dragon fish" by Johann Bayer. Both Willem Blaeu and Andreas Cellarius depicted Cetus as a whale-like creature in the same century. However, Cetus has also been variously depicted with animal heads attached to a piscine body.