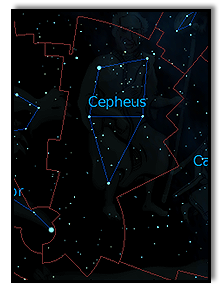 Cepheus is named after the king of Ethiopia who, according to Greek mythology, was forced to sacrifice his daughter Andromeda to the sea monster Cetus.

The Fireworks Galaxy (NGC 6946) is a spiral galaxy in which nine supernovae have been observed, more than in any other galaxy.