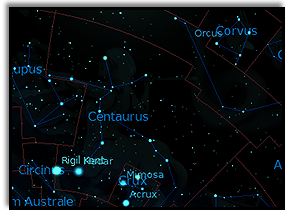 In Greek mythology, Centaurus represents a centaur; a creature that is half human, half horse (another constellation named after a centaur is one from the zodiac: Sagittarius).

Notable stars include Alpha Centauri (α Centauri, α Cen; also known as Rigil Kent) or Toliman, the nearest star system to our own Solar System, its neighbour in the sky Beta Centauri (β Cen, β Centauri), and V766 Centauri (V766 Cen; also known HD 119796 and HR 5171), one of the largest stars yet discovered. The constellation also contains Omega Centauri, the brightest globular cluster as visible from Earth and one of the largest known.

The figure of Centaurus can be traced back to a Babylonian constellation known as the Bison-man. This being was depicted in two major forms: firstly, as a 4-legged bison with a human head, and secondly, as a being with a man's head and torso attached to the rear legs and tail of a bull or bison. It has been closely associated with the Sun god Utu-Shamash from very early times.

The Greeks depicted the constellation as a centaur and gave it its current name. It was mentioned by Eudoxus in the 4th century BCE and Aratus in the 3rd century BCE. In the 2nd century AD, Claudius Ptolemy catalogued 37 stars in Centaurus. Large as it is now, in earlier times it was even larger, as the constellation Lupus was treated as an asterism within Centaurus, portrayed in illustrations as an unspecified animal either in the centaur's grasp or impaled on its spear. The Southern Cross, which is now regarded as a separate constellation, was treated by the ancients as a mere asterism formed of the stars composing the centaur's legs. Additionally, what is now the minor constellation Circinus was treated as undefined stars under the centaur's front hooves. 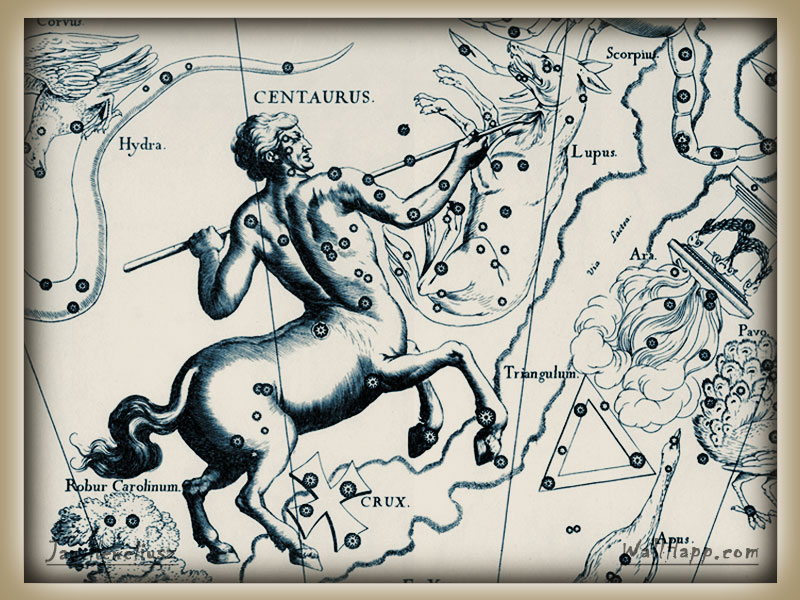 According to the Roman poet Ovid (Publius Ovidius Naso, known as Ovid), the constellation honors the centaur Chiron, who was tutor to many of the earlier Greek heroes including Heracles (Hercules), Theseus, and Jason, the leader of the Argonauts. However, most authorities consider Sagittarius to be the civilized Chiron, while Centaurus represents a more uncouth member of the species. The legend associated with Chiron says that he was accidentally poisoned with an arrow shot by Hercules, and was subsequently placed in the heavens.