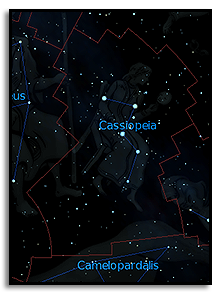 Cassiopeia (Cas) is a constellation in the northern sky, named after the vain queen Cassiopeia in Greek mythology, who boasted about her unrivalled beauty. Cassiopeia was one of the 48 constellations listed by the 2nd-century Greek astronomer Ptolemy, and it remains one of the 88 modern constellations today. It is easily recognizable due to its distinctive 'M' shape when in upper culmination but in higher northern locations when near lower culminations in spring and summer it has a 'W' shape, formed by five bright stars. It is bordered by Andromeda to the south, Perseus to the southeast, and Cepheus to the north. It is opposite the Big Dipper.

Because it lies in rich Milky Way star fields, Cassiopeia contains many deep sky objects, including open clusters and nebulae. 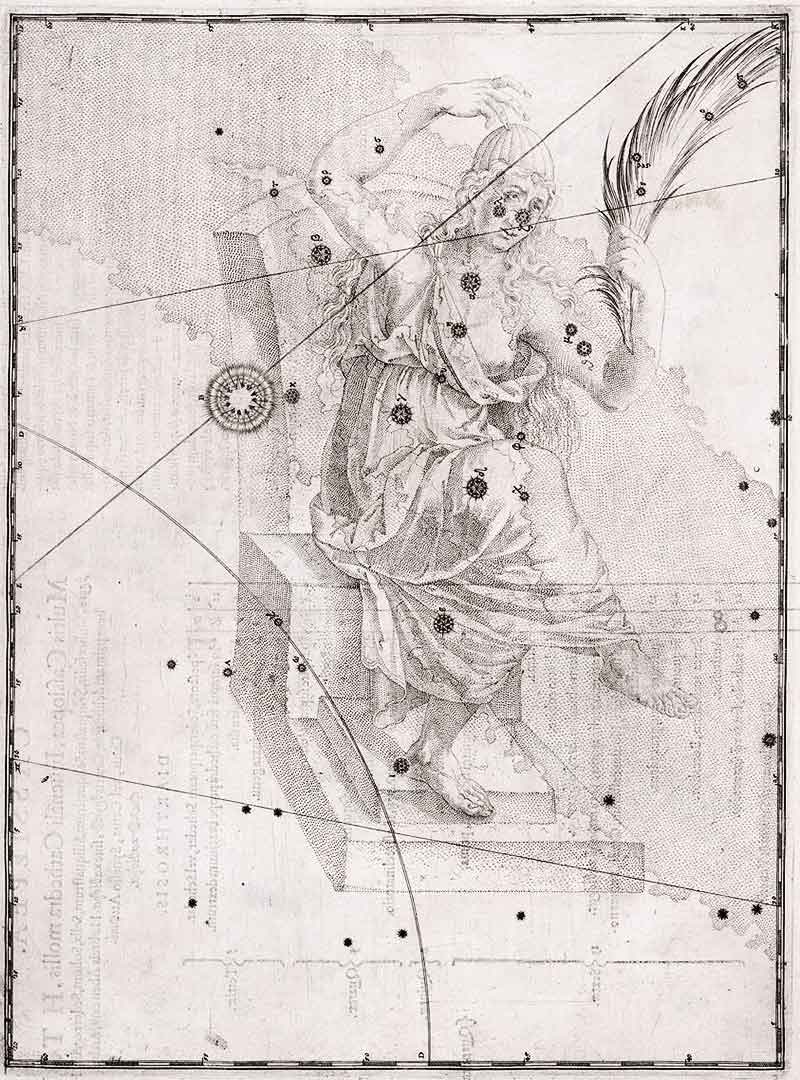 Two Messier objects (The Messier objects are a set of astronomical objects first listed by French astronomer Charles Messier in 1771), M52 (NGC 7654) and M103 (NGC 581), are located in Cassiopeia; both are open clusters. M52, once described as a "kidney-shaped" cluster, contains approximately 100 stars and is 5200 light-years from Earth. Its most prominent member is an orange-hued star of magnitude 8.0 near the cluster's edge. M103 is far poorer than M52, with only about 25 stars included. It is also more distant, at 8200 light-years from Earth. Its most prominent member is actually a closer, superimposed double star; it consists of a 7th-magnitude primary and 10th-magnitude secondary.

The other prominent open clusters in Cassiopeia are NGC 457 (also known as the Owl Cluster, the ET Cluster, or Caldwell 13) and NGC 663, also known as Caldwell 10, both of which have about 80 stars. NGC 457 is looser, and its brightest member is Phi Cassiopeiae, a white-hued supergiant star of magnitude 5.0. The stars of NGC 457, arrayed in chains, are approximately 10,000 light-years from Earth. NGC 663 is both closer, at 8200 light-years from Earth, and larger, at 0.25 degrees in diameter.

There are two supernova remnants in Cassiopeia. The first, which is unnamed, is the aftermath of the supernova called Tycho's Star. It was observed in 1572 by Tycho Brahe and now exists as a bright object in the radio spectrum. Within the 'W' asterism formed by Cassiopeia’s five major stars lies Cassiopeia A (Cas A). It is the remnant of a supernova that took place approximately 300 years ago (as observed now from Earth; it is 10,000 light-years away), and has the distinction of being the strongest radio source observable outside our solar system. It was perhaps observed as a faint star in 1680 by John Flamsteed. It was also the subject of the first image returned by the Chandra X-Ray Observatory in the late 1990s (The Chandra X-ray Observatory (CXO), previously known as the Advanced X-ray Astrophysics Facility (AXAF), is a space telescope launched on STS-93 by NASA on July 23, 1999). The shell of matter expelled from the star is moving at 4,000 kilometres (2,500 mi) per second; it has a temperature of 30,000 kelvin on average. 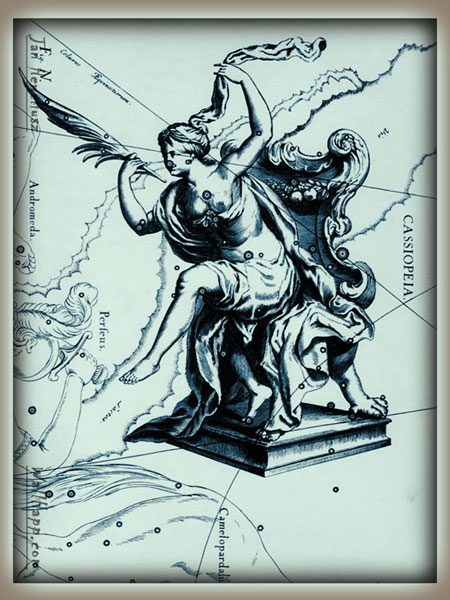 The constellation is named after Cassiopeia, the queen of Aethiopia. Cassiopeia was the wife of Cepheus, King of Aethiopia and mother of Princess Andromeda. Cepheus and Cassiopeia were placed next to each other among the stars, along with Andromeda. She was placed in the sky as a punishment for her boast that her daughter Andromeda was more beautiful than the Nereids or, alternatively, that she herself was more beautiful than the sea nymphs. As punishment, she was forced to wheel around the North Celestial Pole on her throne, spending half of her time clinging to it so she does not fall off, and Poseidon decreed that Andromeda should be bound to a rock as prey for the monster Cetus, who was ravishing the Ethiopian coast. Andromeda was then rescued by the hero Perseus, whom she later married.

Cassiopeia has been variously portrayed throughout her history as a constellation. In Persia, she was drawn by al-Sufi as a queen holding a staff with a crescent moon in her right hand, wearing a crown, as well as a two-humped camel. In France, she was portrayed as having a marble throne and a palm leaf in her left hand, holding her robe in her right hand. This depiction is from Augustin Royer's 1679 atlas.

In the ancient Celtic world Anu was the mother goddess and considered to be the mother of all the gods; the Tuatha de Danann. Other references say that she is the mother earth goddess or the Goddess of fertility. On the Cork Kerry border are two mountains called the Paps of Anu (pap is another word for breast.) On the top of each mountain are stone structures or cairns that when viewed from a distance make the two mountains look like a pair of breasts. Anu was known, in the Celtic World, by several similar names: Danu or Don being the most popular alternatives. She was a Mother-Goddess, the wife of the Sun God, Belenos, and considered to be the ancestor of all the Gods, the Tuatha dé Danann, who found themselves obliged to reside in the Otherworld when Miled brought the Celts to the British Isles. She still looks down on us from the night's sky where she appears as Llys Don, better known as the constellation of Casseopeia.