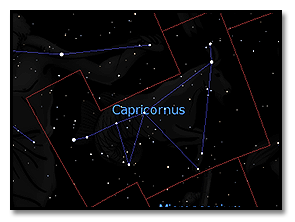 Capricornus (Cap, sea goat) is one of the constellations of the zodiac; it is often called Capricorn, especially when referring to the corresponding astrological sign. Its name is Latin for "horned goat" or "goat horn", and it is commonly represented in the form of a sea-goat: a mythical creature that is half goat, half fish.

Despite its faintness, Capricornus has one of the oldest mythological associations, having been consistently represented as a hybrid of a goat and a fish since the Middle Bronze Age.

Due to the precession of the equinoxes the December solstice no longer takes place while the sun is in the constellation Capricornus, as it did until 130 BCE, but the astrological sign called Capricorn begins with the solstice. The solstice now takes place when the Sun is in Sagittarius. The sun's most southerly position, which is attained at the northern hemisphere's winter solstice, is now called the Tropic of Capricorn, a term which also applies to the line on the Earth at which the sun is directly overhead at noon on that solstice.

In Greek mythology, the constellation is sometimes identified as Amalthea, the goat that suckled the infant Zeus after his mother, Rhea, saved him from being devoured by his father, Cronos. The goat's broken horn was transformed into the cornucopia or horn of plenty. Capricornus is also sometimes identified as Pan, the god with a goat's head, who saved himself from the monster Typhon (Typhon, also Typhoeus, Typhaon or Typhos was the deadliest monster of Greek mythology) by giving himself a fish's tail and diving into a river.

The planet Neptune was discovered in Capricornus by German astronomer Johann Gottfried Galle, near Deneb Algedi (δ Capricorni) on September 23, 1846, which is appropriate as Capricornus can be seen best from Europe at 4:00am in September.