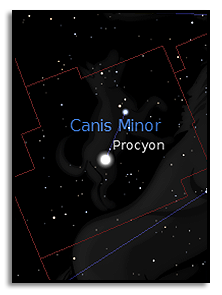 Canis Minor (CMi) is a small constellation in the northern celestial hemisphere. Its name is Latin for "lesser dog", in contrast to Canis Major, the "greater dog"; both figures are commonly represented as following the constellation of Orion the hunter.

Canis Minor was one of the original 48 constellations formulated by Ptolemy in his second-century Almagest, in which it was defined as a specific pattern (asterism) of stars; Ptolemy identified only two stars and hence no depiction was possible. The Ancient Greeks called the constellation προκυων/Procyon, "coming before the dog", transliterated into Latin as Antecanis, Praecanis, or variations thereof, by Cicero and others. Roman writers also appended the descriptors parvus, minor or minusculus ("small" or "lesser", for its faintness), septentrionalis ("northerly", for its position in relation to Canis Major), primus (rising "first") or sinister (rising to the "left") to its name Canis. In Greek mythology, Canis Minor was sometimes connected with the Teumessian Fox, a beast turned into stone with its hunter, Laelaps, by Zeus, who placed them in heaven as Canis Major (Laelaps) and Canis Minor (Teumessian Fox). Eratosthenes accompanied the Little Dog with Orion, while Hyginus linked the constellation with Maera, a dog owned by Icarius of Athens. On discovering the latter's death, the dog and Icarius' daughter Erigone took their lives and all three were placed in the sky—Erigone as Virgo and Icarius as Boötes. As a reward for his faithfulness, the dog was placed along the "banks" of the Milky Way, which the ancients believed to be a heavenly river, where he would never suffer from thirst. 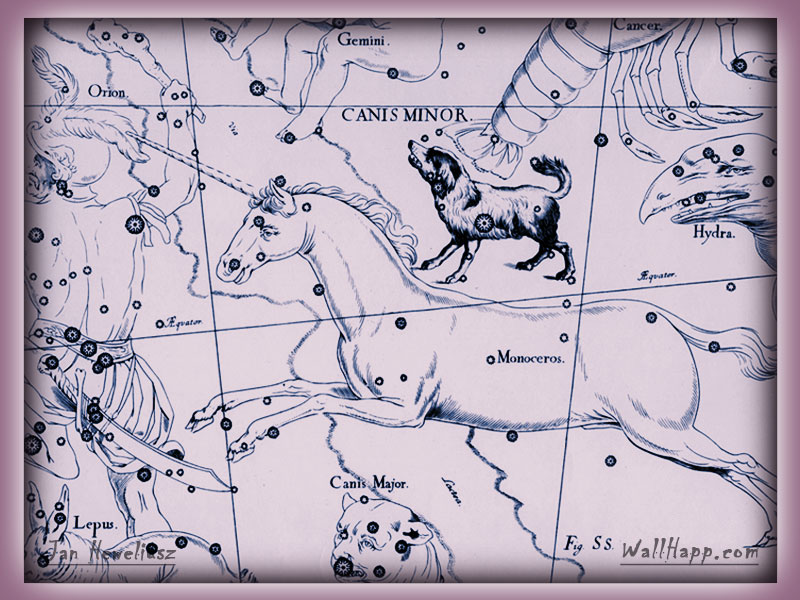 The medieval Arabic astronomers maintained the depiction of Canis Minor (al-Kalb al-Asghar in Arabic) as a dog; in his Book of the Fixed Stars, Abd al-Rahman al-Sufi included a diagram of the constellation with a canine figure superimposed. There was one slight difference between the Ptolemaic vision of Canis Minor and the Arabic; al-Sufi claims Mirzam, now assigned to Orion, as part of both Canis Minor—the collar of the dog—and its modern home. The Arabic names for both Procyon and Gomeisa alluded to their proximity and resemblance to Sirius, though they were not direct translations of the Greek; Procyon was called ash-Shi'ra ash-Shamiya, the "Syrian Sirius" and Gomeisa was called ash-Shira al-Ghamisa, the Sirius with bleary eyes. Among the Merazig of Tunisia, shepherds note six constellations that mark the passage of the dry, hot season. One of them, called Merzem, includes the stars of Canis Minor and Canis Major and is the herald of two weeks of hot weather.

The ancient Egyptians thought of this constellation as Anubis, the jackal god.

Alternative names have been proposed: Johann Bayer in the early 17th century termed the constellation Fovea "The Pit", and Morus "Sycamine Tree". Seventeenth-century German poet and author Philippus Caesius linked it to the dog of Tobias from the Apocrypha. Richard A. Proctor gave the constellation the name Felis "the Cat" in 1870 (contrasting with Canis Major, which he had abbreviated to Canis "the Dog"), explaining that he sought to shorten the constellation names to make them more manageable on celestial charts. Occasionally, Canis Minor is confused with Canis Major and given the name Canis Orionis ("Orion's Dog").