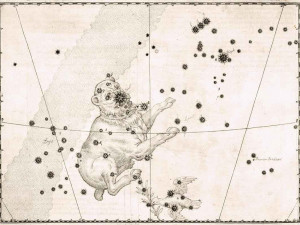 Canis Major (CMa, greater dog) is a constellation in the southern celestial hemisphere. In the second century, it was included in Ptolemy's 48 constellations, and is counted among the 88 modern constellations. Its name is Latin for "greater dog" in contrast to Canis Minor, the "lesser dog"; both figures are commonly represented as following the constellation of Orion the hunter. The Milky Way passes through Canis Major and several open clusters lie within its borders.

In ancient Mesopotamia, Sirius, named KAK.SI.DI by the Babylonians, was seen as an arrow aiming towards Orion, while the southern stars of Canis Major and a part of Puppis were viewed as a bow, named BAN in the Three Stars Each tablets, dating to around 1100 BC. In the later compendium of Babylonian astronomy and astrology titled MUL.APIN, the arrow, Sirius, was also linked with the warrior Ninurta, and the bow with Ishtar, daughter of Enlil. Ninurta was linked to the later deity Marduk, who was said to have slain the ocean goddess Tiamat with a great bow, and worshipped as the principal deity in Babylon. The Ancient Greeks replaced the bow and arrow depiction with that of a dog.

In Greek Mythology, Canis Major represented the dog Laelaps, a gift from Zeus to Europa; or sometimes the hound of Procris, Diana's nymph; or the one given by Aurora to Cephalus, so famed for its speed that Zeus elevated it to the sky. It was also considered to represent one of Orion's hunting dogs, pursuing Lepus the Hare or helping Orion fight Taurus the Bull; and is referred to in this way by Aratos, Homer and Hesiod. The ancient Greeks refer only to one dog, but by Roman times, Canis Minor appears as Orion's second dog. Alternative names include Canis Sequens and Canis Alter. Canis Syrius was the name used in the 1521 Alfonsine Tables.

The Roman myth refers to Canis Major as Custos Europae, the dog guarding Europa but failing to prevent her abduction by Jupiter in the form of a bull; and as Janitor Lethaeus, "the watchdog". In medieval Arab astronomy, the constellation became Al Kalb al Akbar, "the Greater Dog", transcribed as Alcheleb Alachbar by 17th century writer Edmund Chilmead. Islamic scholar Abū Rayḥān al-Bīrūnī referred to Orion as Al Kalb al Jabbār, "the Dog of the Giant". Among the Merazig of Tunisia, shepherds note six constellations that mark the passage of the dry, hot season. One of them, called Merzem, includes the stars of Canis Major and Canis Minor and is the herald of two weeks of hot weather.