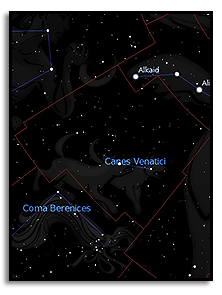 Canes Venatici (CVn, hunting dogs) is one of the 88 official modern constellations. It is a small northern constellation that was created by Johannes Hevelius in the 17th century. Its name is Latin for "hunting dogs", and the constellation is often depicted in illustrations as representing the dogs of Boötes the Herdsman, a neighboring constellation.

The stars of Canes Venatici are not bright. In classical times, they were included by Ptolemy within the constellation Ursa Major in his star catalogue. α CVn was Ptolemy's "28th of Ursa Major", and β CVn was his "29th of Ursa Major".

In medieval times, the identification of these stars with the dogs of Boötes arose through a mistranslation. Some of Boötes's stars were traditionally described as representing the club (Greek, Κολλοροβος) of Boötes. When the Greek astronomer Ptolemy's Almagest was translated from Greek to Arabic, the translator Johannitius (following Alberuni) did not know the Greek word and rendered it as the nearest-looking Arabic word, writing العصى ذات الكلاب in ordinary unvowelled Arabic text "al-`aşā dhāt al-kullāb", which means "the spearshaft having a hook". When the Arabic text was translated into Latin, the translator Gerard of Cremona (probably in Spain) mistook the Arabic word كلاب for kilāb (the plural of كلب kalb), meaning "dogs", writing hastile habens canes ("spearshaft having dogs"). In 1533, the German astronomer Peter Apian depicted Boötes as having two dogs with him.

These spurious dogs floated about the astronomical literature until Hevelius decided to specify their presence in the sky by making them a separate constellation in 1687. Hevelius chose the name Asterion (from the Greek 'αστέριον, meaning the "little star", the diminutive of 'αστηρ the "star", or adjective meaning "starry") for the northern dog and Chara (from the Greek χαρά, meaning "joy") for the southern dog, as Canes Venatici, the Hunting Dogs, in his star atlas. In his star catalogue, the Czech astronomer Bečvář assigned Asterion to β CVn and Chara to α CVn.