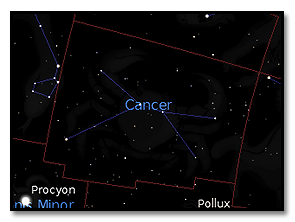 Cancer (Cnc, crab) is one of the twelve constellations of the zodiac. Its name is Latin for crab and it is commonly represented as one.

Cancer is a medium-size constellation with an area of 506 square degrees and its stars are rather faint, its brightest star Beta Cancri (β Cnc, β Cancri) having an apparent magnitude of 3.5. It contains two stars with known planets, including 55 Cancri (55 Cnc), which has five: one super-earth and four gas giants, one of which is in the habitable zone and as such has expected temperatures similar to Earth. Located at the center of the constellation is Praesepe (Messier 44), one of the closest open clusters to Earth and a popular target for amateur astronomers.

In Greek mythology, Cancer is identified with the crab that appeared while Hercules was fighting the many-headed Hydra. The crab bit Hercules on the foot, Hercules crushed it and then the goddess Hera, a sworn enemy of Hercules, placed the crab among the stars.

The modern symbol for Cancer represents the pincers of a crab, but Cancer has been represented as various types of creatures, usually those living in the water, and always those with an exoskeleton.

In the Egyptian records of about 2000 BC it was described as Scarabaeus (Scarab), the sacred emblem of immortality. In the 12th century, an illustrated astronomical manuscript shows it as a water beetle. Albumasar writes of this sign in Flowers of Abu Ma'shar. A 1488 Latin translation depicts cancer as a large crayfish, which also is the constellation's name in most Germanic languages. Jakob Bartsch and Stanislaus Lubienitzki, in the 17th century, described it as a lobster.